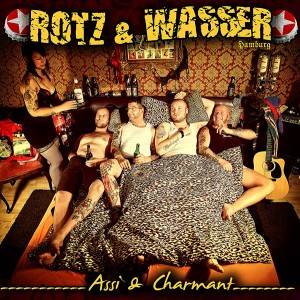 Rotz & Wasser – Assi & Charmant CD (Sound of the Streets)
German oi! and punk can be a strange beast – often deadly serious, political and straight to the point, but on the other hand you have just as many bands that are in it for the fun of it. There is also a whole host of bands not to be taken too seriously such as Eisenpimmel, Die Kassierer or Lokalmatadore – all loud, drunk and lewd to the extreme. Well Hamburg’s antisocial sons Rots & Wasser are follows of that tradition, and this their fifth album is chock full of booze-fuelled party anthems. The music is a solid blend of oi!, rock and hardcore with tough vocals, but with more than enough drunken singalongs throughout the album and a decent sense of melody. They aren’t afraid to mix things up – see the Hawaiian tones of “ABM” or the walzing album closer “Laola”. The lyrics are in German but even without understanding every word you can tell these lads want you to know they like to have a good time. Fans of bands such as Toxpack or Berliner Weisse will love it. Tom Chapman