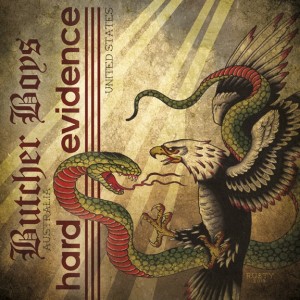 Hard Evidence/ Butcher Boys – split 7″ (Rebellion)
Hard Evidence impressed me with their debut album earlier this year – melodic American style streetpunk, and these two track keep the standard high. “Forgotten” gets this off to a rousing start with a Sham 69-style intro that breaks into an uptempo tune. They follow this up rapid-fire with “Bled Dry” which has a harder edge to it. On the flipside you have Australian bruisers Butcher Boys – although they already have a split with Hammer & The Nails this is the first and hopefully not the last time I have heard these lads. Their contributions “Just Us” and “Garbage Man” are both energetic songs with a Chiswick records/ rock’n’roll inspired guitar sound which is always good to hear. Match that up with a distinctive Aussie rock sound, which is exactly what the Butcher Boys have done and you have a sound that isn’t far off the Crashed Out style. The two bands are matched nicely on here, and if you like the harder streetpunk sounds then this will be right up your street. Tom Chapman