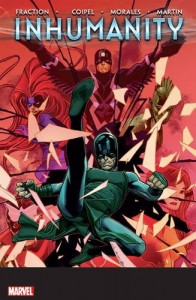 Inhumanity – Matt Fraction, Kelly Sue DeConnick, Sam Humphries, Warren Ellis, Matt Kindt, Christos N.Gage, Olivier Coipel, Jonathan Hickman, Nick Bradshaw, Matteo Buffagni, Andre Lima Araujo, Paul Davidson, Simone Bianchi & Stephanie Hans (Marvel / Panini)
When Attilan fell into the Hudson River, everything changed. On the day it plunged to Earth, the gleaming and ancient home of the Inhumans (humans whose ancestors where genetically modified by Kree military scientists, resulting in manifestation of super-powers and mutations when they come of age and are exposed to the Terrigen mists) served as beacon, alerting humanity to their existence and thanks to the last resort Terrigen Bomb detonated by Black Bolt (the King of the Inhumans) in the final moments of his kingdom, the thousands of Inhumans who had lived, unknowing and unsuspecting, among their human cousins for generations were finally revealed. The mists began to spread and people began to change, they changed into something else, something more than they were, they became Inhuman. In an instant the world and everything about it changed, as the era of the Inhumans arrived.

‘Inhumanity’, begins in the aftermath of Attilan’s fall and is an incredibly touching, immediate and personal story focussing on the reactions to, and emotional fallout and destruction caused by, the cataclysmic event. Those individuals directly involved and those who became involved through no fault of their own are torn apart and then put back together, as their stories are told and the next chapter of their lives begin. It’s a tale of how the Inhumans – seen through the eyes of Medusa and Karnack – react to the loss of their family and home and their determination to help those affected by the tragedy; of how the Superior Spider-Man discovered his humanity when faced by despair whose magnitude was so profound that it’s sufferer was willing to go to any lengths to escape it; of how a teenage girl and her brother find each other and learn who they really are; of a young super-hero whose determination to do the right thing for her teacher opens the gateway to a myriad of endless possibilities and disaster; of all of the lives that they touch and the lives that touch them, and how in the face of catastrophe, the infinitesimal margins and boundaries that separate beauty, hope, death and pain merge and gradually begin to fade. Ultimately though it’s a tale of two species and how finally met and began to learn together.

Some books leave you breathless thanks to the vastness of scale and the magnitude of their multi-angled plots, dizzying over complicated ideas and themes, but ‘Inhumanity’ does it by ignoring, or rather mostly ignoring all of those things. It simplifies the idea at its core, makes it more immediate, more personal and more human, it makes the Inhumans human, and the end result is an epic that stretches the length of the Marvel Universe (the earth bound one that is) and not only looks stunning, but also manages to create a thoughtful, emotive vison that questions established, and out-dated ideas of morality and behaviour, while musing the next steps in human evolution. Oh, and it also features enough bone snapping action, intrigue and adventure to keep even the most ardent, die-hard fan boys and girls happy. Wonderful, absolutely wonderful… Tim Mass Movement