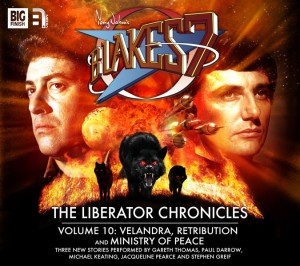 Blake’s 7: The Liberator Chronicles Volume 10 – Performed by Gareth Thomas, Michael Keating, Paul Darrow, John Banks, Jaqueline Pierce & Stephen Greif & Written by Steve Lyons, Andrew Smith & Una McCormack – 3xCD / Download (Big Finish Productions)
Once again we’re heading into deep space as the crew of the Liberator continue their fight against the ever increasing stranglehold of the totalitarian Federation and all of its vicious, corrupt minions. And once again, I was nearly overcome by nervous expectation and excitement, which magnified as soon I discovered that there was a Vila centric story (‘Retribution’) tucked away, safe and warm, in the middle of this latest instalment of ‘The Liberator Chronicles’. What can I say? Some folks dig Avon, some dig Blake, but me, I’m a Vila Restal kind of chap, I like to back the perpetual underdog, and let’s face it, the Liberator’s resident coward and thief fits that bill to a tee.

So, this time, Blake’s crew find themselves supporting and helping to maintain the revolution on a planet that recently, and forcibly, broke from the Federation (‘Ministry of Peace’); the leader of the freedom fighters desperately searches of the truth about a woman he thought he once knew, a woman he dreams about, a woman who once helped him when he was in the clutches of Travis (‘Velandra’) and Vila discovers – to his cost – that all sins are eventually punished, there’s a fine line between friendship and enmity and sometimes business is far more lucrative than loyalty. Three stories, and in each the tension and action gradually build until they become a roaring crescendo; three stories linked by an undercurrent of betrayal and loss and the way Blake, Villa, Avon and the rest of the crew slowly become desensitized to both, hardening themselves against the worst that the Universe has to offer. In space, and when you’re all alone facing insurmountable odds, it’s the only way to survive.

As with the previous volumes, the cast seem to slip back into their roles with an uncanny ease, the characters springing into fully formed and fleshed out ‘life’ aided no doubt by the superlative writing that has an innate feeling for and understanding of the machinations and history of ‘Blake’s 7’. I’ve said it before, and doubtless I’ll say it again, ‘The Liberator Chronicles’ is dramatic space opera at its absolute finest and the series just seems to go from strength, getting better with each successive volume. Zen, full speed ahead, standard by 12… Tim Mass Movement