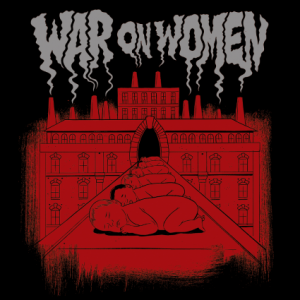 Baltimore, MD co-ed feminist punk act War On Women have announced a February 10th release date for their debut full-length, War On Women. Featuring 11 tracks, this S/T record was recently recorded with J. Robbins at the Magpie Cage (Against Me!, Coliseum, Lemuria). These new tracks are a natural progression for the band and a little more polished than their previous efforts, while remaining as blistering as ever. Vocalist Shawna Potter has “…plenty of material to pull from when it comes to writing lyrics, considering the pervasive sexism in modern America“, she commented.

War On Women formed in 2010 by several veterans of the Baltimore rock scene, including members of AVEC and Liars Academy. Describing their sound as “thrash rock meets riot grrrl“, War On Women write songs too inventive and too loud to be overshadowed by their equally powerful messages. The band’s furious live sets capture all of the brevity and intensity of hardcore punk with another level of lyrical and musical sophistication. War On Women’s songs attack sexist attitudes and institutionalized patriarchy women everywhere still face in the 21st century with humor, intelligence, righteous anger and monster riffs.

The band released their debut EP, Improvised Weapons, back in 2012 on Exotic Fever Records and played alongside punk rock staples Propagandhi, Jello Biafra & The Guantanamo School of Medicine, Murder City Devils, The Menzingers and countless others in support of it. The EP was well received by fans and press alike, with Against Me!’s Laura Jane Grace singing the band’s praises and PopMatters calling them “heavy enough to feel like an injection of lead into the backbone“. Now, War On Women are excited to release their debut full-length album on February 10th via Bridge Nine Records.

More War On Women info coming soon. Keep up with them on Facebook, Twitter, and listen to their releases on Bandcamp.