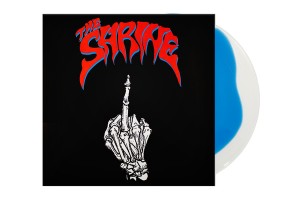 Meticulously melding the hooks and decadence of ’70s rock and glam with the fuck-all vivacity and rebelliousness of ’80s hardcore and skate punk, the self-dubbed “destroyers of rock ‘n’ roll,” worship at the altar of MC5, The Stooges, Black Flag and Annihilation Time without ever replicating them. Waiting For The War serves as the follow-up to the THE SHRINE‘s critically fawned-upon Tee Pee Records-released Bless Off full-length, which earned a spot on Spin Magazine’s Top 50 Releases of 2014 list, likening the band to “Black Flag circa between Damaged and My War if they loved life more than they hated it and liked Thin Lizzy/early Van Halen/old Aerosmith/pre-Nazi Ted Nugent as much as they did Sabbath,” furthering that, “this band’s stop-and-start lurching feels too hamburger-fed and healthy to be hardcore, with one of the most proficiently engine-room-like rhythm sections in recent rock memory, and gratifyingly little if any slow-for-slow’s-sake ‘sludge’ dry-rot or fast-for-fast’s-sake ‘mosh’ malarkey.”

On the maxi-single, THE SHRINE pays homage to 1980s French rock unit, Soggy (known for nailing the Motor City sound) with a spiffy rendition of “Waiting For The War,” still playing at Noisey HERE backed by a sick original, “Rare Breed,” currently streaming at Cvlt Nation at RIGHT HERE.

Waiting For The War is out TODAY via Tankcrimes and comes available digitally and on vinyl in wicked red/black/blue striped wax via mailorder (limited to 100 copies) or directly from the band and blue blob vinyl with a download card included for digitally inclined audiophiles. A bitchin’ stocking stuffer. Order yours HERE.