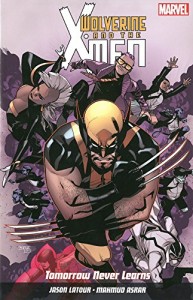 Wolverine and the X-Men: Tomorrow Never Learns – Jason Latour & Mahmud Asrar (Marvel / Panini)
It’s a fantastic time to be an X-Men fan, and it’s an even better time to finally give in and start reading the books. Seriously folks, I can’t emphasise this enough, because with everything that’s going down and happening in the mutant world, there just isn’t enough room in one book to cover and feature everything. Heck, there isn’t enough space in two, three or even four books to tell all of the stories that need to be told and include all of the characters and ongoing arcs that are at the very least peripheral, and more often than not central, to the ongoing evolution of the Marvel Universe. And what’s even worse, is that there isn’t a single title in the ever expanding X-Men canon that won’t deep fry your cerebellum, turn your brain inside out and leave you a gibbering wreck, begging for more. Which brings us to ‘Tomorrow Never Learns’ and one of Wolverine’s final forays as a member of Xavier’s mutant heroes, and even though he’s far more of a team player in its pages, as last dances go, it’s not too shabby. Not too shabby at all.

‘Tomorrow Never Learns’ is an action packed humdinger of a tale that introduces the world, and the X-Men, to the Phoenix Corporation and as Wolverine and his colleagues, some welcome and some not so welcome, set out to find out more about, and bring down, the shadowy figure behind said corporation, things go from bad to worse. As all hell breaks loose, the future hangs in the balance as the destined showdown between the Phoenix and Apocalypse (well, their future selves anyway) splits the Xavier School and those associated with it down the middle. Do you try to prevent it happening or let events run their course, and do they interfere in the lives of the pupils destined to wield that power or not? And while these battles are raging, external forces determined to help force the hand of fate begin to batter at the doors of the mansion, forcing foes to become allies while the decisions that will shape the future of the world are made by a “hero” barely old enough to shave. See, I told you, it’s an absolute doozy of a book.

It not only looks wonderful, but the pace, characterisation and plot are also fantastic, if at times a little mind bending, as the pace of the tale has a tendency to overtake the plot, but stick with it and like me, you’ll be absolutely fine. It’s always heart-breaking when a long standing character like Wolverine is taken from us, but given the phenomenally bizarre, astonishing and amazing characters that wind their way through and burst out of ‘Tomorrow Never Learns’, I think the void he’s left will be filled sooner rather than later and that the future of the X-Men is going to be just fine. I fact, I’m sure it will… Tim Mass Movement