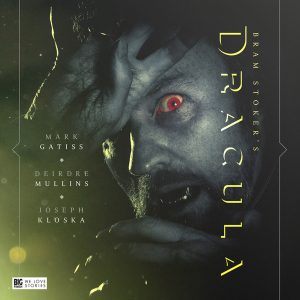 Bram Stoker’s tale of the Lord of the Undead – the vampire Dracula – has long been regarded as a literary classic, and one of, if not the, most important works of horror fiction. A rite of passage for any fan of the genre, it established vampiric mythology and folklore in the mainstream consciousness; its titular protagonist becoming the globally recognised face, and the most enduring image, of the nosferatu.  Throughout its history, Dracula has been adapted for the stage, the screen and radio countless times, and while the most successful have showered wealth and fame on their players, numerous versions of the story have disappeared almost without trace. This faithful, true and steadfast adaptation, while unlikely to increase the fortunes of its already honoured cast, definitely belongs in the realms of the former camp as it brings Stoker’s richly detailed and terrifying tale to delightfully dark and thrilling life.

Following the instantly familiar (to every aficionado) fable of Count Dracula’s voyage from his homeland to the sprawling metropolis of London and his ignominious return when his plans are ruined by the virtuous band of heroes, Dracula is an intriguing, and thoroughly enjoyable character driven journey into the gloomier excesses of the human heart.  While the story is known by almost every fan of the genre that it helped to popularise, it’s subtexts: the conflict of the old world versus the new as the dawn of a fresh century lay tantalisingly on the horizon and the fear of the last great mystery, death are brought to the fore in Jonathan Barnes exemplary dramatization of the tale.  The performances are wonderful and even though each of the major characters are studiously developed and portrayed by the cast, the spotlight inevitably shines brightest on Deirdre Mullins’ Mina, Joseph Kloska’s Jonathan, and Mark Gatiss’ central role as the eponymous villain. Incorporating and utilising some of the more well-known visages of the ancient monster, most notably Lugosi and Langella, into his fantastic rendition of Dracula ensures that while he may not be the most prominent entity in the production, his presence is nonetheless felt throughout this outstanding presentation of Bram Stokers masterpiece. Listen to them, the children of the night, what music they make…  Tim Cundle