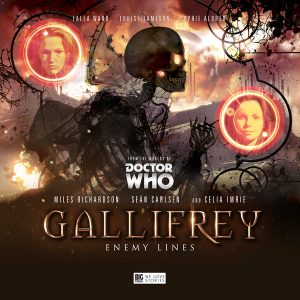 When even the coldest, most practical minded and hardest of us are forced the make the most impossible of decisions, the outcomes of our choices simply become a matter of time. Choose one path and a million possibilities spring into being, choose another and a multitude of different courses are charted by fate. Or so we always thought. But what if time really is linear and there’s no such thing as free will? What if every action that we undertake is planned and accounted for and follows a predetermined and set course that allows the fate of the Universe to unfold along a fixed path? Any deviation from that journey, through say, foreknowledge of the future or someone being sent back in time to alter the course of past events would result in the inevitable development of a paradox, or  paradoxes, which in theory could bring about the destruction of all of time and space.  This is the unwitting position that Braxiatel puts Romana in when he saves her, apparently at the behest of her future self, from a “suicide” mission to bring the collapsing core of a Monan Host time ship under control. His well-intentioned, but thoughtless,  interference in the past sets off a chain reaction of linked events that pushes Gallifrey to the brink of war and sends it into a spiral of mistrust and doubt that leaves it nearly powerless to defend itself. And while Gallifrey sits on the brink of conflict, an ancient, barely remembered remnant of its past returns to rain misery and despair on Romana, Narvin, Leela and Ace as it seeks to repair what Braxiatel has broken.

Gallifrey has always been the Whoniverse’s grandest space opera; the slow burning political thriller that’s built on layers of espionage and steeped in the self-serving machinations, ambitions and lust for power that drive all of its players save for the main cast. Although, there have been times, in series past, when even its core characters have fallen victim to their own hubris. However, in Enemy Lines the drive to war – and the need to escape a future conflict – pose more than enough problems for Romana and her closest confidants as the capital is wracked by betrayal, treachery and near certain destruction if it stands alone. And as Gallifrey is pushed toward forging alliances, in the background, the war drums slowly begin to beat. David Llewelyn has crafted an incredibly intelligent, immaculately plotted story that incorporates all of the deviousness, drama and intricacy that are such a crucial part of Gallifrey and further explores the mythology of the Timelords, adding a touch of the supernatural to their history while spinning a spectacular time traveling tale of tragedy, sacrifice and heroism. While the format is slightly divergent from the Gallifrey  norm, being more akin to classic Doctor Who adventures, it doesn’t stand in the way of the cast proving both their worth and mettle throughout all six chapters, although Lalla Ward and Louise Jameson steal the show in the final part. Without wanting to give away too many spoilers, you might want to have a handkerchief ready, as you’ll almost certainly get some dust in your eye or your allergies will start playing up when their moment in the spotlight arrives.  Absolutely timerific! Tim Cundle