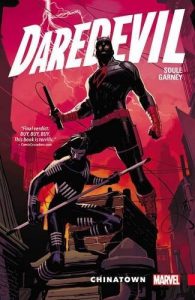 With his “star” very much in its ascendancy thanks to Netflix, the mainstream is finally waking up to, and becoming conscious of, something that those of us who’ve spent, and will continue to spend, our lives devouring comics have always known. That the man without fear, Daredevil, is one of the most fascinating, compelling and intriguing characters in the Marvel Universe.  Lawyer by day and masked vigilante guardian of Hell’s Kitchen by night, Matt Murdoch is finally back where he belongs: on the streets of New York keeping his city, and its inhabitants, safe from those who would put them in harm’s way in order to further their own twisted agendas.  Unlike the fledgling digital show though, Daredevil has a long and storied history in the colour filled world of comics and carries more personal baggage and pain than ninety nine percent of his contemporaries; he knows, more than most, the true meaning of sacrifice and the price that must be paid in order to continue standing against the forces of darkness. Having made sure that the world has forgotten that Matt Murdoch and Daredevil are one and the same, and having burnt his bridges with his best friend and been readmitted to the bar, Matt has returned home to fight the good fight in both the courtroom and in the seedy back alleys and on the rooftops of the city he has sworn to defend.

Chinatown is a real back to basics Daredevil story, with Matt returning to his old nocturnal role and trying to find his feet as a prosecutor for the District Attorney’s office as he battles, and tries to bring to justice, the minions and leader of the Church of Tenfingers.  Charles Soule’s fierce and compulsive story sees Matt taking on an apprentice, Samuel Chung (aka Blindspot) who is just as determined to protect Chinatown as Daredevil is to defend the Kitchen, and who has his own reasons for wanting to see the Church of Tenfingers brought to its knees. But Blindspot and Daredevil aren’t the only people who want to see an end to the travesty of a religious organisation and its leader and self-proclaimed prophet, and before you can yell “Hey cabbie, where’s my change..?”, the champions of New York are locked in an ugly, bitter and extremely vicious three way dance with Tenfingers, his congregation and dark forces of The Hand.  It’s a gripping, gritty, street level tale in which plot and intense, cutting characterisation share centre stage with Ron Garney’s furiously detailed, noir infused art and it finally returns Daredevil to where he well and truly belongs.  Welcome home Matt… Tim Cundle