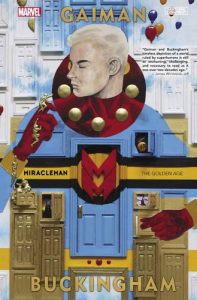 Imagine a world without crime, without war; a world dedicated to peace, the advancement of civilisation and the prosperity of humanity. For all intents and purposes, it would be paradise, giving mankind the opportunity to return to its “birthplace” and live out the rest of its existence in Eden.  This is the world of The Golden Age, which Miracleman and his “family” rebuilt following Kid Miracleman’s destruction of, and eventual defeat in, London. It’s a world in which Miracleman and his ilk are worshipped as Gods, Gods who sit in judgement of humanity from high on their mountain retreat, Olympus. While on the surface it is a place filled with wonder, hope and optimism, once the veneer of perfection is scratched away, the same old fears, irrationality, desires and self-interest that have always plagued humanity soon reveal themselves.  And The Golden Age casts its net upon this world and collects the stories of the mere mortals, men and women, who find themselves at odds with the omnipotence they’re surrounded by.

This is the tale of the man who sought the faultlessness so freely exhibited by his “deities” in his fellow men and women, and when they failed to live up to his expectations, retreated to a life of solitude only to be reminded that beauty is, at best, an illusion and temporary state of being. It’s the story of a mother who having been granted the miracle of parenthood is left cold and alone by her progeny when she is outgrown in every way and becomes merely an afterthought. It’s the story of a woman whose previous life has led to her being trapped in a nightmare world of her own creation, whose salvation lies in her willingness to abandon all that she once knew and embrace a new world.  It’s the tale of a father seeking answers, who despite his trials is told that there are none, and that the will of a God is just as capricious as that of his subjects, and the children who despite being living in nirvana yearn for the cold embrace of cruelty and vanity and so much more. And  it’s also the story of a society attempting,  and sometimes succeeding and sometimes failing, to come to terms with living in an age of miracles, and how the seemingly disparate experiences of the chosen few become forever entwined as “God” answers his subjects prayers and lessens the gulf that divides the “divine” and the “mundane”.  Neil Gaiman’s fable of humanity achieving all that it ever wanted, only to later question it, explores what it means to be human when confronted with, and by, the unknown, and how people respond, emotionally and intellectually to massive, irreversible change. His dreamlike, imaginative and captivating prose is accompanied, reflected, and captured perfectly, by the ethereal artwork of his collaborator and companion on their journey through The Golden Age, Mark Buckingham. It’s a work of staggering and emotive intensity and one that continues, and expands, the mythology of Miracleman in a thoughtful, intelligent and beguiling tome. Exquisite… Tim Cundle