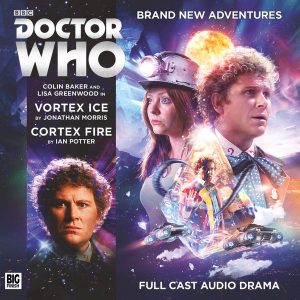 And so it’s time for the Sixth Doctor and his trusted and still relatively new (look, everything is relative when time travel is involved. Just ask Einstein*) companion Flip to once again risk their lives as the whims of the Tardis and her pilots inability to fly her properly plunge them into a duo of deadly, disastrous and, of course, incredibly dangerous scenarios. In the first adventure, Vortex Ice, Old Sixy and Flip become entangled in a wibbly-wobbly-timey-wimey affair in long abandoned Mexican mine, and along with an investigative, archaeological expedition find themselves at the mercy of a creature that has been waiting an awfully long time for someone to free it. And those someone’s just happen to be the Doctor, Flip and their latest allies, but with help arriving in the form of some most unexpected and unusual “associates”, all is not lost even though, as is ever the case, the Doctor can’t save everyone. Having been caught by the ice, the Tardis crew are then thrown into the flames, and are flung to the furthest corners of the galaxy, as the Doctor, in Cortex Fire, determined to show Flip the majesty and beauty that are captured in the dying moments of star becomes embroiled in the affairs of an extremely long lived and completely alien entity that is determined to go to any, and all lengths, to return to its dream of perfection and the realm which it calls home. It’s a strangely endearing story in which, at times, if you’re anything like me, you’ll find your allegiance beginning to wander as the big bad is driven by biotical imperatives. After all, as the old fable says, the scorpion has to be the scorpion and we all have to be who we are. And let’s face it, who doesn’t love a story of a monster who just wants to go home?

Wonderfully authored, constructed and designed, this latest two story set is an intelligent, thoughtful brace of escapades that while not lacking in action or the odd jump out of your seat moment, adhere more closely to the cerebral side of things and embrace the Doctors, especially number Sixes, more unusual quirks and occasional, and oddly charming, inability to see the wood for the trees.  Questioning the nature of time and all of its “malleable” properties, the right to life of all sentient creatures and highlighting how all things are, more often than not, interconnected and that coincidence is just a by-product of the Universes way of aligning, and allowing others to align, the minutia of existence so that point a will invariably, and eventually, lead to point c, Vortex Ice / Cortex Fire is another triumph in Messer’s Morris and Potter’s ever expanding lexicon of Whochievments. And the cast and performances are also pretty good too. Of course, by pretty good, I mean, as they always are when Old Sixy is in command, thoroughly excellent, with each and every member of the ensemble delivering one hundred and ten percent as they set off in pursuit of the Doctor. Top notch… Tim Cundle

*Okay, so my knowledge of the general theory of relativity is a little vague, but I’m sure Albert could explain it to you. If he were alive. Or you had a time machine and could go back and ask him about it.