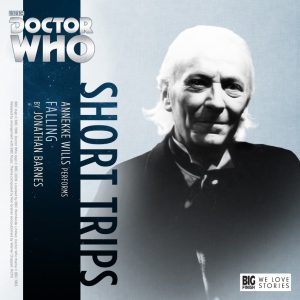 There are two things I can pretty much rely on in this crazy, ‘plot-line straight out of a made-for-the-ScyFy-Channel television movie’ world that we now find ourselves in. The first is that a new entry into Big Finish’s Short Trips series will be a very good thing, and the second is that if the ‘trip’ in question happens to be written by Jonathan Barnes, there’s a very good chance that it will be a brilliant thing.  This month I have NOT been let down. Barnes deftly pulls his listener in within minutes of the story opening, and just hours before the first Doctor’s former companion, Polly, moves to a new home with her husband. So as the last of her things are packed, and feeling nostalgic for the years spent in this happy home, she comes across an item that sparks a memory of her travels with the Doctor.

Cue what on film would be wibbly-wobbly blurring of the screen as a much younger Polly is back aboard the TARDIS with the Doctor and fellow companion, able seaman Ben Jackson. The trio, aboard the TARDIS mid-flight, are awoken from their sleep by a terrifying shared dream, just in time to realise they are caught in the slipstream of an object falling through time and space. Landing the TARDIS at the object’s crash site, the Doctor, Ben and Polly come to the aid of the object’s occupant, and meet a being like no one they have come across before. This adventure may well have happened long ago, but it has still had a huge impact on Polly’s life…

Anneke Wills has a voice that can be listened to for hours, and in Falling she quickly finds the voices of all four characters. I found it easy to visualise the interplay between her, Ben and a softer-edged Doctor, but also enjoyed getting an insight into the workings of Polly’s mind. She notices the Doctor has become frailer in body and mind of late, then dismisses this concern as soon as the situation looks more dangerous and the Doctor is back to his young-but old best. It was at this point that I remembered that it was Ben and Polly who were there to witness the first Doctor’s regeneration, which I’m thinking happened very soon after this brief interlude.

It can be hard for a story within a story to be unpacked in just over 37 minutes and to keep its clarity and cohesion. Falling does this very well, because, at its heart, it’s a story that hands the listener a simple concept which manages to get straight to the heart of what Doctor Who is all about: helping others in time of crisis. Perfect. Bex Ferriday