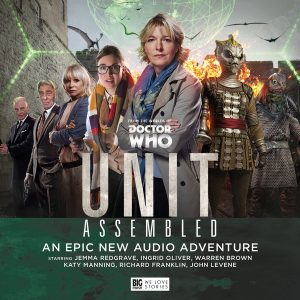 A quick glance at the latest release from Big Finish made me do a double take, as I wondered why I’d been sent IKEA instructions to review. I’m clearly an idiot, as this was not what I had been sent at all. And thank the Lord for that. I’m not sure how one goes about reviewing furniture assembly documentation, though I am rather good with Scandinavian MDF and an Allen key.

Enough rambling. As you’ve already worked out, this is actually the latest epic UNIT adventure, and if it’s half as good as the stories that have gone before it, then it’ll be worth a listen. And – here’s a bit of good news for you – it’s the best yet. That’s probably got a lot to do with me being old enough to remember the golden years of UNIT some 40 years ago, back when the third Doctor was UNIT’s landlocked Scientific Advisor, the companion was ‘someone for the dads to ogle’ and Brigadier Lethbridge Stewart was exalting the value of pumping ten rounds rapid into anything even slightly alien with erstwhile colleagues Corporal Benton and Captain Mike ‘Turncoat’ Yates. So yes, I admit that I punched the air when the story opened with a first chapter written by Matt Fitton.

Call to Arms is a clever piece of writing that effortlessly joins the old and the new, beginning with a modern UNIT team needing help when a routine mission goes wrong. The story features a familiar foe willing to do terrible things to the ‘stinking apes’ inhabiting his planet, and Benton and Yates showing their age, but more importantly their experience. In a touch-and-go situation they demonstrate that, despite retirement, once you are a part of UNIT, you are always a part of UNIT, and can NEVER ESCAPE!

Guy Adams takes over the writing reins with Tidal Wave. He brings back the magnificent Jo Jones (nee Grant) as UNIT tackles an undersea base in the South Atlantic. Jo teams up with fan favourite Osgood, and the scenes between the two of them are bloody marvellous. Think fan-girl and mother-hen with added oomph.

Adams then moves the action to the Mediterranean in Retrieval. This part of the adventure centres on modern UNIT, focussing on a last-ditch attempt by Kate Stewart and Osgood to fight back against the growing alien force. Enter warrior Tryska, a chilling hunter played with evil relish, and an opportunity for Kate to do something more meaningful to do than attend meetings, and stretching Ingrid Oliver to the limits with some fantastic (and very different) scenes for Osgood.

Everything pulls together in Matt Fitton’s final chapter United, with old and new UNIT facing an array of reptilian foes as the action switches from central London to various locations around the country.  Can the stinking apes survive? It’s close, and UNIT need all their resources.

UNIT: Assembled is a big, swarthy, entertaining set of stories featuring a classic villain, great performances all round and Ken Bentley’s usual taut direction. Gemma Redgrave and Ingrid Oliver have the chance to round-out their characters, making UNIT more than the ‘Dad’s Army Lite’ ciphers we often see on our screens. Osgood, especially, is exposed to a whole new set of challenges. But the best thing for this incredibly middle-aged fan? Thanks to The Sarah Jane Adventures and the popularity of ‘adjunct to television’ audio adventures, Katy Manning is enjoying something of a Renaissance. This is a fantastic thing, because we finally get to see and hear just how much depth she has as an actress. Take away the fur coat, PVC boots and constant repetition of that seminal question: ‘But why is that Doctor?’, and she shines. I have been loving her work in the recent Tom Baker-centric Bakers’ End stories, but here Jo Jones is as ‘fizzy’ as ever, but also mature, knowing, on-the-ball and just cynical and world weary enough to give her more layers that we ever saw in the 70s. You go girl!  Bex Ferriday