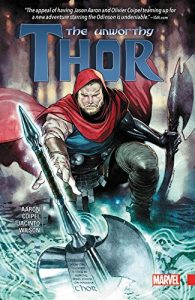 While the world focussed its attention on Jane Foster, otherwise known as Thor, the previous owner of Mjolnir, now called (by his own insistence) Odinson, slipped under the radar and seemingly disappeared. Until now. The Unworthy Thor is the story of the god who fell from grace, who after listening to the whispered revelation of Nick Fury found himself unable to fulfil his destiny and undeserving of the power Mjolnir has previously bestowed on him. Having fallen prey to melancholy, Odinson fills his days with drinking and battling trolls and remaining hidden from the prying eyes of Midgard and his former colleagues, but when he hears the rumours of another hammer, one that might “restore” him to his former glory, he sets off in eager pursuit of the possibility of redemption. Aided in his quest by an old friend, he is brought to his knees and reduced further than he ever thought possible by one of the most ancient creatures in the universe who seeks, as do others, the same artefact as Odinson and is willing to go to any lengths to acquire it. But some prizes are worth fighting, and even dying for, and as the hammer from another time and space, one that belonged to another Thor lies waiting to be claimed, all those who seek the endowment and reward it promises eventually meet on the field of battle to fight for the power to be a god.

I know that a lot of folks would have you believe that Walt Simonson was the power behind the throne as far as Thor is concerned, and while I’m more than partial to his run on the book, and J. Michael Straczynski’s, the current master of the god of Thunder’s destiny, Jason Aaron has risen to become part of Thor’s holy creative triumvirate. Aaron has an incredible feel for dialogue and an almost unnatural ability to get under, and inside, the skin of Thor and his contemporaries, understands the character in a way few can and is able to craft multi-layered plots and stories that seamlessly flow into each other, while Olivier Coipel’s elegant, detailed and beautiful art, makes Thor’s world seem almost real, translating perfectly from imagination to page. And The Unworthy Thor is further evidence of the genius responsible for bringing it into being, as it ponders acceptance, responsibility, the nature of change and individual position and place in a constantly shifting Universe, while delivering an outstanding and astonishing saga of a god’s dangerous and (self) destructive journey home. Lo there do I see my father… Tim Cundle