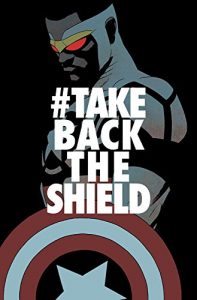 With Steve Rogers in Hydra’s grasp and Bucky serving as the ‘Man on the Wall’, there is only one bastion of all that Captain America ever was, is, should and could be left standing, and that man is Sam Wilson. Even though I was adamant that he wouldn’t make me a believer, Sam did exactly that. He made me believe, and with every page and panel in #Takebacktheshield he continues to make me believe that he, more so than Steve Rogers and James Barnes is the man who should have been wielding the shield for the last decade.  With the more radical and right wings elements of the country he’s dedicated his life to protecting baying for his blood, Sam is drawn deeper into the machinations of Hydra by his supposed best friend and in the midst of political assignation and upheaval, becomes even more vilified than he already is, falling prey to the increasing tendency toward manipulation and control by fear and hate that is slowly tightening its grip on his city, his country and his home. But in the middle of the chaos and carnage, he finds solace and comfort and his friends and joy in the little things and the reminders of how good life can be (and life doesn’t get much better than live Professional Wrestling, as Sam soon discovers) while his staunchest ally embarks on her own quest, carrying the shield into combat in order to halt a particularly nasty and grubby little get rich quick scheme that preys on the reputation and characters of the female superhero community.

I was always of the opinion that Steve Rogers was my Captain America and that no-one, not even Bucky, could replace him, but Nick Spencer is slowly and surely changing my mind, as I’m increasingly beginning to think of Sam as being my Cap. Some wise sage once said that  the best fiction mirrors reality, and #Takebacktheshield is a fantastic reflection of the current turmoil that modern society is caught up in, incorporating and utilising all of the vilest real world scenario’s into its plot in order to give it a sense of realism that comics don’t try to capture and all too often veer away from. It’s a hard hitting book that doesn’t flinch, or shy away, from following its own incredibly candid and enjoyable path, that thanks to its focus on charcterisation and dialogue as well as action and the knockout art of Renaud and Unzueta continues to carry Captain America’s legacy into the halls of the immortals.  Sam Wilson, you are my Captain and may the Avengers forgive me for ever having doubted you… Tim Cundle