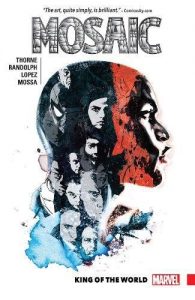 Like most things in life, Terrigen doesn’t care about social status, fame, wealth, ego or any of the everyday mundanity that humanity seems to prize above all things; it only cares about twisting the genetic make-up of those individuals “lucky” enough to carry Inhuman DNA.  Which is sort of unfortunate for Morris Sackett, world renown basketball player and permanent fixture the celebrity scene, as his privileged life of opulence, wealth and luxury is brought crashing to a halt when he’s touched by Terrigen and his world is turned upside down as he becomes the latest member of the Inhuman tribe. Emerging for his cocoon as something “other” than he was before, he’s greeted by fear and panic as his ability to leap from person to person, taking the over and learning everything that they know manifests itself. He becomes Mosaic, a patchwork man who knows, remembers and see’s all that those whose lives he touches do, but who remains strangely incomplete. Longing for nothing more than to return to his old life, Morris sets out to do just that, but in doing so discovers that there are some things that you just aren’t “meant” to know as he learns that the person that he thought he was never really existed, and that the man he was supposed to be was born when the Terrigen touched his soul.

Geoffrey Thorne’s story of unwanted revelation, of being careful what you wish for and confronting the unknown, is that of a man cast adrift in a sea of amoral, self-serving characters, all of whom, bar the average folks (or ‘Grinders’ as Morris calls them), are equally loathsome and detestable. King of the World lambasts and rips apart the cult of the celebrity and the monsters it makes of all those it embraces. It rejoices in the accomplishments and goals of the ninety nine percent, as Mosaic moves from the realm of the former into the kingdom of the latter and becomes the vessel that Thorne uses to illustrate the fallacy of fame and celebrate the fact that nobody is “average” and everyone has a story to tell if you can just find a way of getting them to tell it. The artwork, courtesy of Messer’s Randolph and Silas, lends the book a sense of urgency and excitement as it has an almost manga quality that blends seamlessly with Thorne’s narrative to create a unique and intriguing origin tale that feels like it could really be the beginning of something wonderful. Make way for the King of the World… Tim Cundle