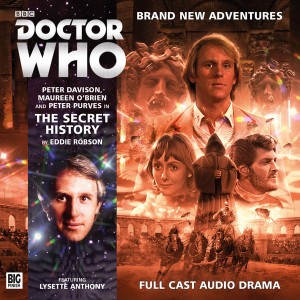 Doctor Who: The Secret History – Starring Peter Davison, Maureen O’Brien, Peter Purves, Tony Millan, Giles Watling, Sarah Woodward, Lysette Anthony & Tim Wallers & Written by Eddie Robson – 2xCD / Download (Big Finish)
One of things that makes us human, that defines the nature of our species, is our need to celebrate landmarks, achievements and anniversaries, and for their two hundredth (main range) Doctor Who story, Big Finish gave in to that impulse and decided to (as well they should) celebrate in style with ‘The Secret History’, a tale that epitomises everything that makes Doctor Who, well, Doctor Who. It’s all here. Historical adventure, aliens, time travelling shenanigans that’ll boil your brain if you think about them too hard, a returning arch-villain and a captivating, clever plot packed with humour and fantastic characterisation that links the First Doctor to the Eighth by way of the Fifth. They certainly pushed the boat out for ‘The Secret History’, and it shows in every single moment of this unmissable drama. It is, truth be told, rather good.

Concluding the latest trilogy of connected dramas in which different Doctors (namely the Seventh, the Sixth and now the Fifth) have found themselves misplaced in their own time stream alongside another Doctor’s companions fighting the good fight while vainly attempting to find out why said transference has taken place, ‘The Secret History’ ends proceedings on a high, and incredibly enjoyable, note. This time, the Fifth Doctor returns to the time of his first incarnation, and with a little help from Steven and Vicki finally discovers who has been bouncing him around his time-stream and why, all while he fights to keep history on track, Constantinople and the Eastern Roman Empire from collapsing and himself being wiped from time entirely. As you’d expect with a story of this magnitude, the particular nemesis at the centre of events is one who has plagued the Doctor throughout his lives, but one more recognized for his tenure with Big Finish than in the original series, but one whose appearance, and reason for hounding the Doctor is more than apt, fitting and welcome. And yes, they did keep his identity a secret by not including him in the cast list, as if the actors name had appeared, we’d (that is fandom) have all let out a collective sigh, slapped our foreheads and exclaimed ‘Of course, it had to be!’ and that would have taken some of the fun out of finding out for ourselves, wouldn’t it?

‘The Secret History’ is a pleasure to listen to, a fun, fast romp that twists and almost seems to end in disaster before the Doctor does something incredibly clever (as he always does) and saves time, the universe and everything in disaster before the reset button is given a good hard push and all and sundry returns to normal. Well, as normal as it ever is in the Whoniverse. It’s the perfect way to celebrate such a prodigious anniversary, by letting the Doctor do what the Doctor does best. Here’s to the next two hundred… Tim Mass Movement