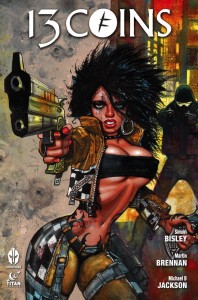 13 Coins – Simon Bisley, Martin Brenna & Michael B. Jackson (Titan Comics)
Despite, or maybe because of, the fact that I’m a Gaianist, I’ve always found religious mythology, iconography and art fascinating, none more so than the war in Heaven: the war waged between angels that started because of the “creator’s” favouritism toward humanity. At least that’s how it goes in the most popular versions of the story (Milton’s ‘Paradise Lost’ being the most famous of all them) that explain the existence of Lucifer, demons and the “price” that we as a species, and others, have paid and continue to pay, for the “gift” of free will. “13 Coins” uses the legend of Heavenly conflict as it’s starting point, but instead of following a tried and trusted path, it veers off at almost a right angle, delivering a highly original and inspired variation on the theme that pits the descendants of ‘The Fallen’, the angels who rebelled and where defeated, against those of ‘The Son’, the descendants of the angels who loyal and ultimately victorious. With the stage set, it begins at a frankly incredible pace and doesn’t lose any momentum throughout it’s frantic, intelligent and all-encompassing plot that sees a reluctant, unknowing, ‘hero’ recruited to the cause in order to regain the 13 Coins (forged from the bonds of the rebel leader), before The Fallen can find their imprisoned leader and once again take up arms, using humanity as cannon fodder, against God. Oh, and before you ask, yes, it’s every bit as exciting, thought provoking and involving as you’d imagine it to be.

However , it isn’t for the faint hearted, squeamish or anyone easily offended, as Simon Bisley’s incredibly detailed, dark, almost other-worldly art is brutal, bloody and wonderful; and Brennan and Jackson’s story doesn’t hold back, delighting in its vicious dialogue and uncompromising story-telling. ’13 Coins’ doesn’t suffer fools gladly, expecting its readers to keep up with the lightning quick plot and underlying themes of the individual’s struggle to fit in and find their own identity and place in the world, and the corporate and political manipulation of society by demons that mirrors the reality of Western society and the age old lies of freedom and democracy. This is the kind of book that would make God happy, and he’d be first in line at his local comic shop to pick it up the moment it arrived. And if it’s good enough for God (whether you believe in him or you don’t), it must be good enough for each and every one of us, right? Damn right… Tim Mass Movement

Find out more about ’13 Coins’ by visiting www.13coinscomic.com