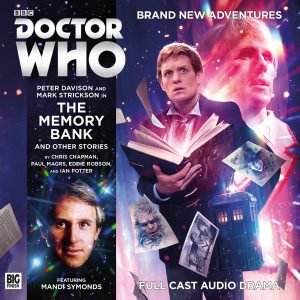 The Memory Bank and Other Stories rewards the hardy Big Finish adventurer with four writers and four very different stories based around one theme – the unreliability of memory. Tonally, it’s a mixed bag; a glorious patchwork quilt of dark and light, serious and silly, but while the mood may vary, the quality shines across all four stories; there’s not one rotten apple to be found in this particular barrel.  It begins with Chris Chapman’s eponymous story based on a world where if you’re forgotten you cease to exist. Were this concept not frightening enough to begin with, it is made more poignant and perhaps more terrifying with the burden placed on a man who has been charged to remember.

Up Next is Paul Magrs’ The Last Fairy Tale, a glorious mash-up of classic Doctor Who and Angela Carter, used to great comic effect. It’s a tale about the power of stories and storytelling and it’s peppered with the trademarks that make Magrs stories such a joy – beautifully daft names and characters whose initial silliness hides a deep sadness. And if you want full-on daft then have a listen to another of Paul Magrs’ current series, Baker’s End, which is proper daft.

Eddie Robson’s Repeat Offender  begins with a bang: the Doctor stands accused of murder and must prove his innocence to an inflexible system that values computer memory over organic recall. It all feels rather Philip K Dick (certainly no bad thing), and Robson treats the audience to an ingenious twist that adds an extra dimension to the story’s title.

The collection concludes with Ian Potter’s The Becoming, a story that faithfully recreates the feel of those late 70s and early 80s Doctor Who annuals; the ones where the stories drew much more on ‘hard’, literary SF than the televised series. It sees the collection end on the kind of hopeful, uncertain note that every Davison story seemed to end on…or so my unreliable memory tells me, anyway…

It’s been a fair old while since Peter Davison and Mark Strickson teamed up like this (a quick Google search tells me it’s over ten years), so as a Turlough fan, this was a long overdue (and very welcome) entry to the Big Finish universe.  They enjoy an easy rapport and Davison gets to employ that dry wit that always undercut the ‘wet vet’ stereotype that he needed to play against. Turlough’s gentle despair and scepticism plays beautifully off this, and their relationship it finds a way to make the pair genuine friends without undercutting the edge that always seemed present on screen; you get the impression that by this point these two actually enjoy each other’s company but in stereotypical male style they’re never going to be crass enough to say it; they give the stories a warm but never mawkish heart. This is particularly welcome when the stories take a distinctly darker tone. It’s to be hoped that Strickson can be persuaded to stay and record a few more stories while he’s in the mood.

Ultimately it’s that variety that makes this such a fantastic release; whether you like your Doctor Who ‘like it used to be on the telly’ prefer it light and witty or want something that’s smart and cerebral, there’s something to suit all tastes. It’s the clash of styles that gives the collection its energy; four wildly disparate styles united by wonderful performers and an overarching theme that forms a strong, cohesive whole. There are nothing but good memories for this reviewer! Bex Ferriday