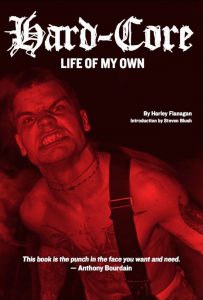 Anyone who’s been around the Hardcore scene for more than two decades either has a Cro-Mags story to tell, or knows someone who does. Those stories will always involve John Joseph or Harley Flanagan, the infamous duo who helped make the band everything that it was, is and always will be, and who earned their reputations as both musicians and scene stalwarts the hard way. While their well-documented and very public falling out reached its incendiary climax at a world-famous-for-fifteen- minutes incident at a show in Webster Hall, the history of what brought it to that point is, arguably, down to the decisions that they both made and the paths they chose to walk. The history of the Cro-Mags, and of NYHC, is inextricably tied to the tales of their lives and Hard-Core: Life of My Own is Harley’s unflinching, raw and often brutal story, told as only he could tell it.

It isn’t an easy book to read; and honestly I don’t think Harley intended it to be. While his young life was full of travel (he’d seen more of the world than most of us can dream about before he was twelve years old), it was also the sort of life that no child should realistically lead, as his he and his mother bounced from place to place living a hand to mouth existence.  While he was exposed to music, culture and art, it was during a time when drug and alcohol abuse was prolific within creative communities, which meant that he saw perhaps too much, and essentially went from being a toddler to an adult in the blink of eye. By the time he was twelve, he was a New York native and a touring, recording musician in the early punk scene while living in grinding poverty in the toughest neighbourhood in one of the hardest cities on Earth. And that period in his life would go on to define him. See, Harley learned that you do what you have to do to survive, and that’s that. Life taught him that it was either them or you, and it was nothing personal, you just did what you had to in order to get through each day. After discovering like-minded souls who shared his love of, and for, music , he became part of the foundation of what would become New York Hardcore, and his band (because no matter what anyone else says, it was Harley’s band) the Cro-Mags were part of its embryonic beginnings. And in a lot people’s minds that band would go on to define what that scene was all about during its formative years.

Hard-Core is Harley’s warts and all story, detailing the darkest periods of his life: his failings, the times he fell down and didn’t pick himself up, the missed opportunities, regrets, triumphs, the good times and bad. And by the time you’ve finished reading it, you understand who he is, and why he’s the way he is, but more than anything else you want to give a bear hug, pat him on the back and tell him that everything is going to be okay. You want to tell him that you’re proud of the man he’s finally become, and that even though the journey was long and hard, and no-one, neither you nor Harley, was sure that he was going to make it, he finally got there in the end. Whether or not everything in Hard-Core is strictly truth, well, that’s a little more difficult, as everyone remembers things from their own perspective, and as such, inevitably, has their own honestly held reality. After all, everyone is the central character in their own story, so the full truth about who did what and why they did it, probably lies somewhere in the middle of it all, caught in the haze of time and cerebral fog. Apart from Chris Williams who ran Rock Hotel, because having interviewed more than a few of the guys in the bands that he dealt with and having read Harley’s take on him, I’m pretty sure that he’s a douchebag and if you’re looking for someone to blame for the lingering resentment that surrounds the Cro-Mags, he’s it. That said, having been around long enough myself, and having heard more than a story or two about Harley from various people (at least one of which is mentioned in this book almost verbatim as I was told it by one of the people on the other side of the other side of the incident) I’m inclined to believe that as crazy and fucked up as a lot of the events in Hard-Core are, they’re as true as they can be given the “altered” state of consciousness that the author spent a lot of  time in.

Harley doesn’t pull his punches when it comes to talking about his friends, associates and former band mates, and while he’s also forthright in his self-condemnation and admits that he was no angel, I suspect that the way the folks he discusses at length remember those times is somewhat different to how he does. Because at the end of the day, no two stories are the same, and everybody has a different take on things.

Told in an easy going, no bullshit, no thrills, straight up manner that’s akin to sitting down for a beer or five with an old friend rather than some staid, boring regurgitation of facts, Hard-Core isn’t just the story of one of NYHC’s founding fathers, it’s a glimpse into the psyche of a complicated, intriguing individual who’s journey on the path to self-discovery has taken enough detours and wrong turns to fill ten lifetimes. Like Harley’s music, Hard-Core is fast, loud and infectious and once you’ve been exposed to it, you’ll never want, or be able, to forget it. Thoroughly recommended.  Tim Cundle