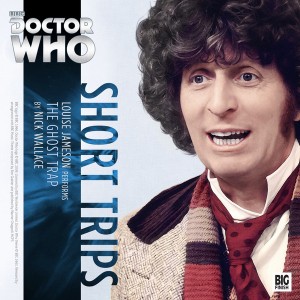 Doctor Who: Short Trips: The Ghost Trap – Written by Nick Wallace & Narrated by Louise Jameson – Download (Big Finish)
Remember what Ridley Scott told us about space? That no-one can hear you scream? It isn’t true. The Doctor can hear it, The Doctor hears everything. Which is why he and Leela are the only people to respond to a distress signal sent by a salvage crew from a seemingly derelict spaceship built by a race famed for their ability to navigate Hyperspace in a manner undreamed of by other sentient species. Some signals though, are better ignored, as they bring only misery and suffering, as the Doctor and Leela discover when they find themselves on the ship, a vessel mired in death, horror and a mystery that draws them in, and the more they discover, the more horrible the truth becomes until they’re finally forced to confront the entity that lurks in the shadows and the hidden corners of the ship, the thing that lies at the heart of the enigma.

‘The Ghost Trap’ feels like it could easily have been part of series fifteen of Who, it’s H.P. Lovecraft meets William Gibson Haunted House in space plot feels like the perfect third, and final, act in a loosely connected (and entirely abstract and hypothetical of course) trilogy that includes ‘The Horror of Fang Rock’ and ‘Image of the Fendahl’. It’s tight, exciting, melancholic and moving plot, as well as drawing the listener in and keeping them hooked until the opening bars of the end theme , explores and ponders the nature of organic technology and relationships that, by necessity, would have to develop and exist between user and machine, emotional response and connection within a gestalt mind and how humanity (this one has become a staple of science fiction I know, but dammit, I still love it when it’s used effectively and intelligently, as it is in ‘The Ghost Trap’) is, thanks to our inherent nature, its own, and that of countless other species (real and imaginary), worst enemy. Fantastic… Tim Mass Movement