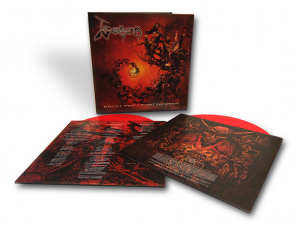 VENOM have issued a first run of vinyl for current album ‘From The Very Depths’. The album was released to much critical acclaim in January of this year on compact disc and digital formats only.

The LP version will be available on Record Store Day, and in the spirit of the cause, this isn’t just any run of vinyl but a 2-disc gatefold limited run of just 300 copies for the UK, stained a bloody red.

Go and get your copy from one of the hundreds of independent record stores taking part in RSD up and down the country on April 18th. Check out the list of participating stores on the official website here: www.recordstoreday.co.uk

In addition to this, a new lyric video for the track ‘Smoke’ – taken from ‘From The Very Depths’ – is viewable HERE!