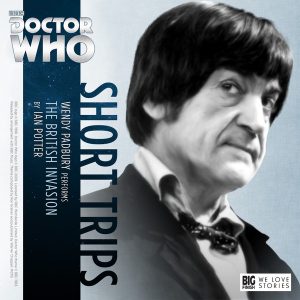 The Doctor brings his companions Jamie and Zoe for an adventure in 1951, visiting the British festival where a small act of kindness could be the TARDIS crews undoing.

My doctor is the Second Doctor which I have to say from the start! The first Doctor Who audio tales that I owned were The Underwater Menace and The Space Pirates on CD which I acquired during the middle of the millenniums opening decade. Even though these two stories weren’t and aren’t the most loved among fans, they left me with a profound love of this period of Who’s history.

In The British Invasion Big Finish are able to capture the feel and setting of the Second Doctor’s era with their usual magnificent skills. Being a short trip it does what is says on the tin and provides us with a snack sized adventure that can be digested in a single sitting. This release is narrated by Wendy Padbury, or as most of us know her Zoe and she takes to the role of narrator very well, evoking a feel of her co-stars characters with an energy and enthusiasm, which while listening to The British Invasion made me picture Pat Troughton dithering around in his mad dash way and Frazer Hines playing Jamie in his usual boisterous fashion. The story doesn’t stand out as one of Big Finish’s finest. However it is a lovely piece of Second Doctor fun which I have no fear in saying I shall return to when I feel the need for some escapism. Potter as a writer interests me and I must dig out more of his stories, because he was able to take me away from my sofa to the museum and radio telescope featured in this story. The sound scape as ever is lovely, not to invasive and adding just enough to the story to make it worthwhile.

The British Invasion is enjoyable and while there’s no chance of it appearing in my top ten of Who audio adventures, listening to it made me want to dip my toes into more short trips. In fact, I can’t wait to hear more. Until next time. Legion Henderson