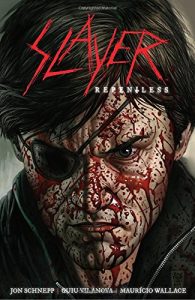 Few bands have ever reached the levels of fame and infamy that has afforded them the ability to cross over from sweat drenched stages to the pages of the four colour world. The Ramones rocked out with Archie, GWAR grossed out in full splash-page-a-riffic form on an indie level and I’m sure KISS must have popped up somewhere as Gene Simmons wouldn’t have missed the opportunity to add a few zero’s to their bank account, but apart from them and maybe some tie in promotional album release freebies and inserts, I can’t really think of any bands that have launched their own comics. So, is Repentless the first book based around a band and one of their albums to have appeared from a major comic published? I’d like to say yes, but then again, I’m not sure and unfortunately my knowledge of such things doesn’t extend to the point where I can definitively stand up in public and exclaim “Yes, this is the first band based comic, so there” to no-one in particular. However, what I can tell you is that Slayer: Repentless is actually pretty good, even though Slayer are reduced to minor league players in its pages.

That’s right kids, the thrash titans take a back seat and are merely along for the uber-violent ride in John Schnepp’s tale of sibling rivalry and blood drenched vengeance. Given the major political upheaval in the world and the rise of right wing and neo-Nazi extremists, Repentless strikes an incredibly relevant chord as it centres on the battle between the last surviving members of a family torn apart by their opposing belief systems and the fascist organisation that lies at the centre of all of their woes.  Schnepp’s story doesn’t tip toe around its subject matter and dives headfirst into every aspect of it in gruesome detail, and much like Slayer’s music, isn’t for those who are easily offended by the uglier side of life. And again, like the music of the band that lend this book their name, and grace it with their presence, the fast and frantic plot doesn’t let up for a second and while the characterisation is little two dimensional in places, the incorporation and usage of Slayer song titles and lyrics (sometimes successfully, sometimes less so) into the dialogue will bring a smile to the face of many a pit hardened thrash warrior. Aided and abetted in all of its gory glory by the magnificently intricate artwork of Guiu Vilanova, Repentless, again, much like Slayer, is a full throttle, rollercoaster ride that throws its middle finger up at convention and revels in every ounce of its horrifically entertaining mayhem.  Hell awaits… Tim Cundle