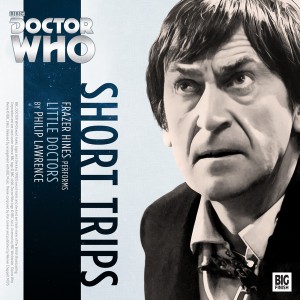 Doctor Who: Short Trips: Little Doctors – Performed by Frazer Hines & Written by Philip Lawrence – Download (Big Finish Productions)
The future is an ocean of endless possibility, beckoning humanity to enter and become all that it could be. On the surface, the idea is one filled with promise, except that promise will always foul of the one thing that’s always held us back. Our own nature and our dependence on our creations, and it’s his dependence that is questioned in ‘Little Doctors’, when the Second Doctor, Jamie and Zoe travel to the colony of Olympos, a colony governed and run by an artificial intelligence called Zeus, and while the reference to Greek mythology may lead you to believe that it’s a society in which hedonism and pleasure are valued over all other aspects of life, nothing could be further from the truth.

Operating for the good of all of its citizens, Zeus controls everything from marriage to spare time to the role that each individual fulfils in the colony; a place where life has become infinitely repetitive, and the small things that give life vibrancy have all but disappeared. As is his want, The Doctor decides that he’s going to change things for the better and sets out to challenge Zeus and introduce colour, joy and spontaneity into the life of all of the citizens. But confronting Zeus and entering the system proves more than a little problematic; and before he knows what’s happening, the Doctor has “infected” the colony, and hundreds of “Little Doctors”, like the gremlins of legend before them, proceed to change the colony forever. Fighting his tiny selves and battling to make Zeus see, and understand the error of its ways, The Doctor and his friends find that the future of Olympos, and whether it will thrive or stagnate, rests entirely with them.

‘Little Doctors’ is a fun, classic series romp that feels like it should have aired on television in the late sixties. It’s a tale of freedom versus conformity and the individual versus the system in which David serves up, quite by accident of course, multiple exaggerated versions of himself in order to defeat Goliath. Frazer Hines uncanny portrayal of the Second Doctor is, as ever, a joy to listen to and Philip Lawrence’s silver age Sci-Fi story provides the perfect environment for him to unleash The Doctor and do what he does best. Bring a little colour and pleasure into everyone’s lives. Which is exactly what he does… Tim Mass Movement