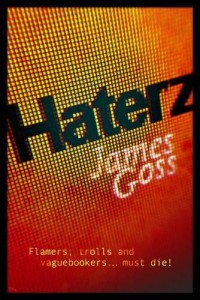 Haterz – James Goss (Solaris)
Sometimes, just sometimes, you stumble across a book that helps lifts the weight of the world from your shoulders or make you suddenly realise that you’re not alone. Haterz was like that, letting you know you’re not the only one who thinks the way you do and that it isn’t some chemical imbalance or biological accident that makes you obsess, and rage furiously at anyone who’ll listen, about the selfish, inexplicable, narcissistic, greedy and vacuous behaviour of the morons, minor-celebrities, politicians and corporate whores who suck all of the joy and pleasure out of life. These people, whose social media feeds are filled with endless drivel about how fantastic their lives are, or what they had for dinner and their ridiculously, ill-informed and stupid opinions on everything from the X-Factor to mainstream political policies (which they never seem to understand) and every culturally backward stop in between. When it comes to suffering fools, and those who would treat us fools, my rage is almost limitless, but unlike Dave, the central character in James Goss’ ‘Haterz’, and like the majority of the population, I never do anything about it and slowly, and continually, choke on my own fury as it I internalise my anger, knowing that one day, it’ll hot me with a massive cerebral event and kill me just as surely as if I’d stepped in front a moving train. Anger won’t kill Dave though, because Dave has found a way of dealing with the people who thrive on misery and making the lives of others hell. Dave fights back and punishes, humiliates or kills those who ruin social media, entertainment and life in general for the rest. And that’s why I love Dave.

Even though he stumbles into his new “career” following an incident that goes too far involving his best friend’s girlfriend, after which a super-secretive organisation somehow discover what he did and employ him to keep doing it, Dave suddenly becomes an avatar for “good”. Starting small, he quickly works his way through the ranks of human banality, dispensing justice to increasingly “important” targets in increasingly nasty and personal ways. But, as the old saying goes, nothing lasts forever and the further he pursues his new employers agenda, the more his life begins to unravel until he’s finally confronted by the truth of his endeavours, a truth that’s far more twisted, bizarre and bigger than he ever dared imagine.

James Goss’ blackly humorous tale of wish-fulfilment, revenge and making the world a better, nicer place one tiny step at a time, is an absorbing, involving story filled with believable and likeable (Dave) and not so likeable (just about everyone else) characters, who you can, and do, immediately relate to. You want to keep reading, because you want to know who’s next Dave’s list and what vile actions have led to them being visited by him and whether their infractions are minor (ruining Facebook for others) or major (financially crippling people to make slightly profit), they are all treated in a manner befitting their misdeeds. ‘Haterz’ is a funny, sharp, socially focussed take of the trials, tribulations and pitfalls of modern life and one man’s quest to make life a little better for everyone, and I loved every word, paragraph and page of it. And you know what? I think you will too… Tim Mass Movement