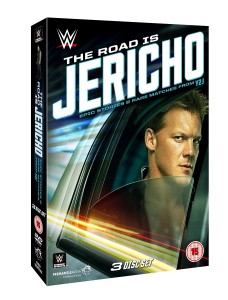 WWE THE ROAD IS JERICHO – EPIC STORIES AND RARE MATCHES (WWE DVD)
There is not a bad match on this entire three disc set, spanning hidden gems from across the entire career of “the best in the world at what he does”, Y2J, Chris Jericho.  Jericho has already had the full documentary treatment in the equally excellent “Breaking The Code” DVD set a few years ago (and has written an extensive, three part autobiography in his fantastic books, “A Lion’s Tale”, “Undisputed” and “The Best in the World”), so this new collection is really about the matches more than Jericho himself (but even then, Jericho is a great host, introducing each fight with funny stories and interesting insights that, if you have read his books, make great little addendums to the autobiography, and if you haven’t, should inspire you to find out more).  Because there has already been a Jericho collection realised, the joy of this set is that the matches contained within are more obscure and less obvious – the deeper cuts of his phenomenal career.

We begin back in ECW, with a great match against Pit Bull #2, and move quickly into WCW classics against Ultimo Dragon and Dean Malenko (one of my favourite Jericho rivalries – the man of a thousand holds versus the man of 1,004 holds – leading to a great Bobby Heenan line:  “Brain, you don’t really believe he knows 1,004 holds do you?”  “No, of course not.  1,003 maybe, 1,002, but not 1,004!”) before quickly getting to the real meat of the collection: the forgotten classics of his multiple WWE runs.  A steel cage match with X-pac offers the awesome sight of a walls of Jericho on top of the cage (though the custom-built platform on which they do it is a ridiculous elephant in the room – clearly waiting for some sort of shenanigan high atop the structure.  They have since been made far more subtle!) and reminds us just how good not only Jericho is, but Sean Waltman.  Then we get a reminder of why Glen Jacobs has been such a permanent (and relevant) fixture in WWE for years, as Kane battles Jericho in a Last Man Standing match that has an excellent nod to Stephen King’s Carrie at the end.

It is the next run of matches, however, that make the discs so special – old Raw matches between Stone Cold Steve Austin and Booker T.  As Jericho himself comments – it’s amazing to think that he has had so many amazing matches with Hall of Famers like Austin that even he can’t remember them all, and to find a great one he has forgotten – including Mick Foley as a special referee – is a treat!  The Booker T match is made even better from the secret Jericho reveals beforehand regarding the amount of “DiCaprio” he and Booker do in their matches together (acting flourishes in between the moves).  A match between Jericho and Kurt Angle from the old UK-only PPV, Rebellion is great fun too, and I’m glad Jericho’s dastardly exposed turnbuckle, low-blow and feet on the ropes combo from Royal Rumble 2002 is finally given the recognition it deserves before another string of Smackdown and Raw foundlings against the likes of Triple H, Edge and Jeff Hardy.  A Last Man Standing match between Jericho and Shawn Michaels from a 2008 episode of Raw filmed in the UK is excellent, and makes good use of the traditional post-box and taxi props that are used to denote “Britishness” to viewers.  Meanwhile a “dark match” (filmed after the TV show of Raw went off the air) of Jericho versus John Cena for the World Heavyweight Title goes to show how much these guys go through to entertain the fans, even when the show ends for us at home (plus we get some excellent ringside faces from John Cena Snr!)

It becomes apparent from the number of gimmick matches on here just how good Jericho is at making storylines work and building a programme beyond a single blow-off match on a Pay-Per-View.  I had forgotten about his efforts to take Rey Mysterio’s mask back in 2009, and the mask versus IC title match included here is brilliant.  Meanwhile I can’t remember a better street fight than the “Chicago Street Fight” between Jericho and CM Punk – far better than their Wrestlemania encounter and featuring an awesome Bridge 9 “Drug Free” shirt worn by Punk bearing a straight edge version of the Misfits logo.

A magic moment at Madison Square Garden occurs when Jericho teams with Big Show to fight D-X and the impromptu team of John Cena and the Undertaker.  An electric crowd and a hall-of-fame roster of participants made every move feel special.  Meanwhile the returning RVD gives Jericho a gift as they are asked to go for an extra segment than planned and put on a modern classic on a 2013 episode of Raw.

The collection brings us right up to the present with 2014 matches against “the eater of worlds”, Bray Wyatt and “the viper”, Randy Orton, and by the time the collection is over you are left in awe at how Chris Jericho can somehow manage to fight giants, technical workers, submission specialists, hardcore brawlers, powerhouses, high fliers, and anyone any wrestling promotion throws at him and somehow manage not only to get a match out of them, but a great match out of them, each one different than the last, and each one offering something innovative and new.
There is no excuse not to buy this collection because there is simply nothing not to love about it.  As far as DVD collections of the matches of Chris Jericho go – it is the best in the world at what it does. DM