Warning: preg_match() expects parameter 2 to be string, object given in /var/www/vip4/sites/vip6102689/httpd/htdocs/wp-includes/formatting.php on line 4866
 Two Out Of Three Falls - Mass Movement
x
Spread the love 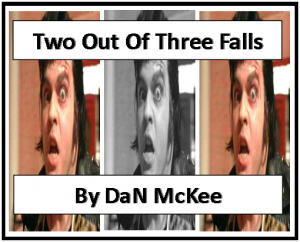 The road to Wrestlemania is upon us once again, and thanks to an eventful Fastlane PPV, even though the destination feels predictable, WWE is at least trying to provide a few twists and turns to delay the inevitable and give fans a little sense of the “what if” that keeps us tuning in. However, that said, there comes a point where, when the answer to “what if” continues to become “it won’t”, we start to lose faith and seek other avenues of entertainment.
I haven’t been able to get into UFC and MMA…yet. The idea of people actually hurting each other rather than just pretending to is unappealing, and I find that the matches I have watched just don’t grab me emotionally in the same way a well-paced professional wrestling match does. While wrestling allows for ebbs, flows, set ups and hot-spots – a psychological journey of drama and storytelling – UFC all too often descends into two people hugging and kicking until one big move ends it all.
That said, I do keep going back and checking in.
And I remember a time, back in 1991, when a friend of mine told me to watch wrestling and I tried but didn’t get it: why would you want to watch these cartoony muscle freaks pretend to hit each other for three hours? But I kept going back and checking in –Summerslam ’91, Wrestlemania 8 – and then, somehow, without quite knowing how, I was hooked.
I was a child in 1991 and the cartoony muscle freaks began to appeal – they were like the characters in the comic books I read come to life and fighting all the same battles: a million variations on good versus evil, heroes versus nemeses, light versus dark.
But I am an adult now, and become increasingly frustrated when the product I love insults my intelligence. When they expect me to join in with xenophobic patriotism and hate the Russian just because he’s Russian (he’s actually Bulgarian!) or believe that for some reason the WWE have the worst employment record in history and continue to hire malicious people to run the company in a manipulative, evil way, determined to piss off all the fans and screw over the superstars we all like. 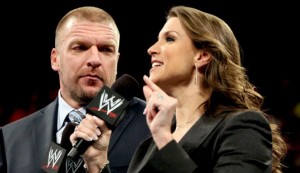 I mean, seriously – I remember being excited as a kid at the revelation that Vince McMahon really owned WWE and they were finally saying it on TV, and then watching in awe as the dastardly boss tried to keep down the working man, Stone Cold Steve Austin. Then it was revolutionary. But that was nearly twenty years ago now. Time for another story! We’ve had Eric Bischoff as the evil GM, Vicki Guerrero, William Regal, the first McMahon-Helmsley Era, John Laurinitus, the Anonymous Raw General Manager, Mike Adamle, Jonathan Coachman, Brad Maddox – and now the Authority. In each case we are supposed to believe that our heroes are in some sort of jeopardy because the person in charge is out to get them…but the thing is, since I started watching wrestling in 1991 the odds have always been stacked against the good guys in wrestling, and they have always overcome them. So forgive me if I stopped caring sometime around the hundredth time John Cena was told that he wouldn’t leave some PPV or another with his title, only to eventually overcome all the odds and win yet again…only to have another deck stacked against him once more the following week. 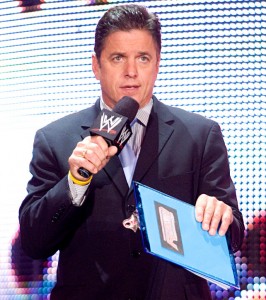 Wrestling is about good versus evil and always has been – but the lines do not always have to be so boringly black and white: the boss versus the worker. Historically, good and evil has had so many different manifestations in wrestling: the betrayal of a tag-team partner, the cheat and the person who plays by the rules, the brothers turned rivals, competition mutated into envy, a love triangle, professional jealousy, a detestable personality (arrogance, cruelty, braggadocios), an unhinged and dangerous individual (psychotic, supernatural, cult-like), and a variety of personality clashes between different, carefully drawn characters. Yet for some reason, at the main event level in WWE, we seem to be stuck in this rut of 1990s McMahon versus Austin/Boss versus employee with no end in sight. As soon as one evil boss in vanquished, another one rises up and takes control, and it is getting tedious. We get it – in 1997 Vince McMahon screwed Bret Hart. Now it is time to get over it and change the creative direction of the company.
The worse thing about the monotony of this trope is that it has watered down and ignored what should be the main force of all wrestling storylines – the idea, carefully preserved through intelligent booking and sound creative, that wrestling is actually a real competition, and that highly trained athletes are fighting for the opportunity of one day becoming World Heavyweight Champion.
Once that idea is instilled in the audience – that matches are not simply there to sell advertising and kill TV time, but are the mechanism by which performers develop the win/loss record that will get them a title opportunity – we always have a good reason for two people to fight, and then along the way we get hundreds of different opportunities to tweak those fights and develop specific personal issues between the personalities involved to heighten the drama of their battles. 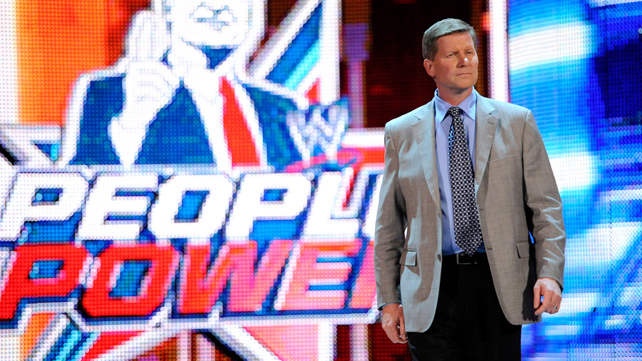 Just look at NXT, where the only role the General Manager has is to make matches (like the old WWE role of “President” in Jack Tunney’s day). We have lots of captivating angles and rivalries but most of them have a strong foundation in the idea that the men want to be NXT champion, the women want to be NXT woman’s champion, and the tag teams want to be tag team champs. No one is constantly fighting an unfair authority figure, endlessly stacking the deck against them, but each member of the roster is embroiled in compelling storylines – either feuds or character developments – which makes their presence on the show worth watching, and the matches they have meaningful.
The best thing WWE have done over the last year is build Brock Lesnar as a champion – what I love about this guy is that he alone has become the deck that stacks against the contenders for his gold: no shenanigans and corrupt authority figures cheating for him to win, just an unstoppable monster who has beaten all the competition that has been thrown at him. When we wonder if Roman Reigns will walk away from Wrestlemania as WWE World Heavyweight Champion, it is not because we wonder who will screw him out of the title, but whether or not he has what it takes to beat the Beast. This is the same thing that made the Undertaker’s Wrestlemania streak so compelling each year – no shenanigans, just a simple question: is tonight going to be the night that he gets beat?
But even then, Lesnar is tarred with the stink of being The Authorty’s supposed hand-picked champion (a story which, itself, is incoherent with their apparent desire to see Seth Rollins or Randy Orton as the champion too?)
When we watched Kevin Owens dominate and destroy NXT champion, Sami Zayn to win the title via referee stoppage, there was no extraneous nonsense going on, just a vicious competitor absolutely owning his opponent due to something that happened in the match.
Because that is what happens in sports – you take advantage of your opponent’s mistakes and weaknesses, sometimes fairly, and in a way that shows sportsmanship, and sometimes in a way that makes the crowd feel uneasy.
And now Owens is a name known by every wrestling fan in the world. 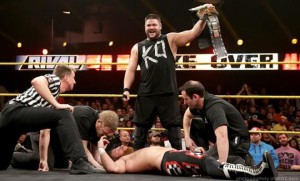 I am all for outrageous storylines in wrestling – but I need them to do two things: link back to the idea that that the issue has some legitimate reason to be settled in a wrestling ring (and not in a courtroom, or employment tribunal, or parking lot), and maintain enough believability and logic – even at the total extremes of believability and logic – that it doesn’t insult my intelligence to enjoy and buy into it.
So why was I talking about UFC?
Because although I don’t like it – yet – I can respect its integrity: people fight there for good reason – they want to be champion and they want to win. And sometimes, within the framework of this sporting competition, we are discovering personality clashes, or other personal issues driving the fights between the competitors. And you know who are watching UFC? Adults. Many of those same adults who once used to watch WWE before it became about appealing to corporate sponsors more than its own fans.
Most importantly, it is where CM Punk is headed. My favourite wrestler. The Best in the World. And it is where reigning, defending, undisputed world wrestling federation heavyweight champion of the world, Brock Lesnar, came from, and is considering returning to. Hell – if you count the amount of times the Undertaker has been in the crowd at a UFC event, he has probably attended more MMA in the last few years than he has wrestled in a WWE ring.
There is no doubt that, as a CM Punk fan, I will watch his UFC debut, and win, lose or draw, as I watch, I will be wondering about the millions – and millions – who watch this product now instead of WWE. I know that I myself am too far gone with professional wrestling to quit now – I may add UFC to my interests, but likely won’t drop WWE for it. But I know I’m the exception, and I know that the longer WWE continues to rehash the same tired old storylines and continue to treat its audience like children, the more older fans who have seen it all before and are sick of having their intelligence insulted will move elsewhere for their sports entertainment.
And even me; as I said, I remember a time in 1991 when I knew I would never start watching that ridiculous thing called wrestling. And then I did. Because it was better than everything else I had been watching, and enjoying, up until that point. DM 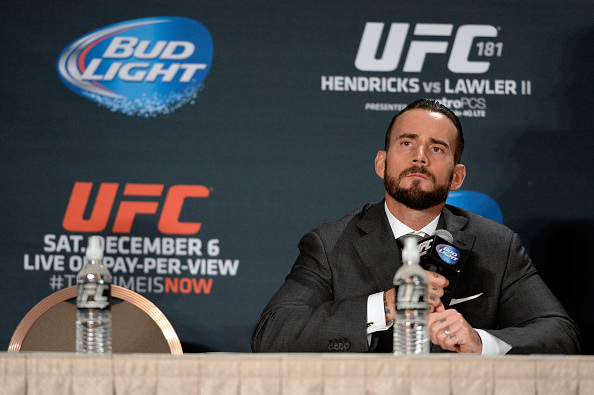