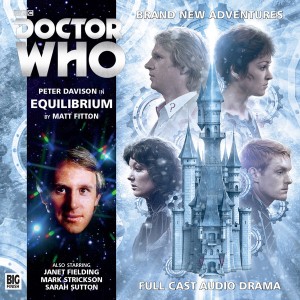 Doctor Who: Equilibrium – Starring Peter Davison, Sarah Sutton, Janet Fielding, Mark Strickson, Nikolas Grace, Annette Badland, John Albasiny, Joanna Kirkland & Ella Kennion & Written by Matt Fitton – 2xCD / Download (Big Finish Productions)
Equilibrium is defined as being a state in which opposing forces or influences cancel each other, thus achieving a state of balance, which is a an ever increasing rarity as far as The Doctor is concerned. Still trapped in E-Space with Turlough, Nyssa and Tegan and in pursuit of what was taken from them, and the Tardis, and the man who took it. Forced to land (or crash, depending on your point of view and whether you think the glass is half empty or half full) on the ice planet Isenfel, the crew of the Tardis soon discover that, welcomed as they are, in some societies, there’s a price to be paid for even the most basic of hospitality, and that life has a price that all must be willing to pay.

Having tracked their quarry to Isenfel, The Doctor and his companions struggle to adjust to, and understand, life in a society that must weigh every decision against the limited resources that it has available, a society that having been forced to do so since it’s foundation, has come up with a unique, and highly logical (if slightly horrific) way of governing itself. Nothing is ever as it first seems to be when The Doctor becomes involved, and before you can make the dematerialisation noise, he finds out that his friends and himself, have become part of experiment, one that’s nearly run its course. It’s action stations all round if The Doctor, Tegan, Turlough (who finds himself the object of the unwanted, if not wholly unrequited, affections of a Princess) and Nyssa are to have any chance of saving everyone, finding what they came for and escaping before everything collapses in on itself and “petri-dish” colony of Isenfel disappears in a puff of planetary smoke.

The return to E-Space has also seen a return of the science heavy, led and driven stories that formed the original fourth Doctor trilogy, and ‘Equilibrium’ is a story that thrives on, and is built around entropic decay (measured and studied in a closed environment in order to understand how it would play out on a much grander stage) and the idea that limited energy would result in the creation of an environment in which the populace could only thrive if they understand the nature of sacrifice and put the needs of the “state” above those of the individual. It’s a fascinating tale that makes for riveting, exciting and action packed drama as the consequences of such a harsh existence weigh against each other, and ultimately, the actions of The Doctor. After all, if you bring external forces into an, effectively, sealed system, it can have catastrophic consequences, which is, more often than not, what happens when The Doctor ends up becoming entangled in anything. And don’t get me started on the devastating ending for the crew of the Tardis when…Oh, wait, I’ve said too much. Mum’s the word and if you want to find out what happens, you’ll have to listen to ‘Equilibrium’. Believe me, you won’t be disappointed… Tim Mass Movement