Warning: preg_match() expects parameter 2 to be string, object given in /var/www/vip4/sites/vip6102689/httpd/htdocs/wp-includes/formatting.php on line 4866
 Doctor Who: Novel Adaptations: Theatre of War - Mass Movement
x
Spread the love 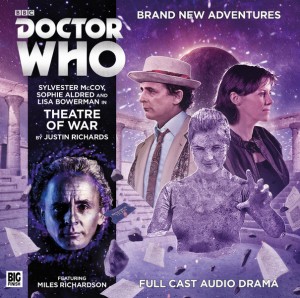 Much as I hate to admit it, there was a time in my life, following the show’s cancellation, when I tuned out of Doctor Who.  For seven years, I left fandom behind as I concentrated my energies on travelling and vainly attempting to make a “mark” on the punk rock scene with my decidedly second rate, but fun nonetheless, band. In fact, it wasn’t until the Doctor Who Movie was first broadcast in ’96 that I returned to the welcoming bosom of the Tardis, but as we all know all too well, a lot can happen in seven years. During my absence, the canon and mythology surrounding the Doctor exploded as the Virgin New Adventures took control of his destiny sending him into new and uncharted territory.  While I’ve desperately being trying to play catch-up since my return, trawling eBay and the like for the books I missed, there are still more than a few novel sized holes in my quest for Who completion, and one of said holes just so happens to be Theatre of War. On the plus side, that meant that I got to experience the story for the first time while listening to this, Justin Richard’s scintillating adaptation of his original novel. However, on the downside… Well, in all honesty there isn’t really a downside. Apart from the fact that I still don’t have the novel, which having heard Theatre of War, is a mistake I fully intend to rectify at the earliest possible opportunity.

It’s a story of impossible theatres and ancient planetary cultures dedicated to the pursuit of the dramatic arts; of intergalactic conflict and archaeological expeditions; of lost plays and the all too real consequences of the damage caused by perpetual war. Finding themselves up in the second expedition to explore Menaxus, the first having ended in tragedy, Ace, Bennie and The Doctor are catapulted in the heart of the brutal hostilities that govern that quadrant of the galaxy.  And the Doctor being the Doctor, soon finds himself immersed in a rather clever and cunning scheme to finally bring the fighting to a halt. Unfortunately, this time it isn’t his idea and as his strings, and those of his companions are pulled ever tighter, he ends up dancing to the tune of an intellect that might just be superior to his own in a tale in which nothing is what it first seems to be. But with a little help from a historical collection and the power behind it, the Doctor, Ace and Bennie take centre stage and prepare for the final act, one that’s guaranteed to bring the house down.

Theatre of War, as well as laying the foundations for what will go on to become one of the most important relationships in Bernice Summerfield’s life, is also an elegantly constructed, multi-layered story that keeps its audience, and the Doctor, guessing until the end. Furiously placed and devilishly plotted, it’s both cunning and fun and filled with razor sharp wit, dialogue and action all of which expertly manifest themselves thanks to the superb cast and writing.  Encore, encore… Tim Mass Movement