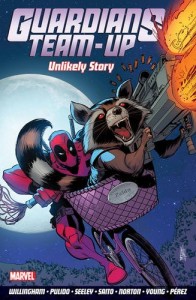 Just as things were starting to return to some semblance of normality following the silly season, we’re catapulted back into insanity in the company of the craziest, zaniest bunch of heroes in the Marvel Universe. That’s right folks, the Guardians of the Galaxy are back, and this time they’re not alone. ‘Unlikely Story’ collects a series of one shots in which various members of the Guardians team-up with a bunch of equally odd super-heroes in order to dispense justice, right wrongs and do what they do best.  As it’s a collection of the four colour universe’s version of short stories, it would be in keeping with the traditional “laws” that govern such things, that the quality of the tales and art on offer should vary greatly. However, as with everything else they do, the Guardians appear to have subverted any such ideas while tearing the rulebook into a million pieces; because each of the featured fables cranks the story and art quality dials up to eleven and then some.

Whether it’s Drax teaming up with Ant-Man to secure the return of devastatingly deadly alien technology, Gamora and Nightcrawler battling their way to the finals of a duelling competition in order to fulfil their ‘didn’t-see-that-coming-oh-wow-that’s-so-cool’ mission, Pete and Pete (that’s Quill and Spidey) being forced together to clear one of their names and get back what’s Pete’s (that’s Star-Lord to you) or Deadpool and Rocket out-whackying each other in a convoluted, bonkers and deliciously fun take of twisted revenge, every page and every panel oozes with creativity, energy and excitement.  But the highlight has to be the heart-breaking, emotional and action packed rollercoaster that sends the Silver Surfer and Groot on a hope-filled and hopeless rescue mission. Featuring just two panels of dialogue, it’s told through their deeds, through the gorgeous artwork that bleeds from the pages and carries the entire narrative.  Get your hankies ready, because it’s guaranteed to leave a little grit in your eye and it’ll stay with you, repeating over and over again, long after you’ve finished reading the final page. And then there’s the last chapter, the one devoid of any of the Guardians in which everyone’s favourite fourth wall shattering mercenary in desperate need of employment signs up with Galactus.  It’s fast, it’s a little insane, it’s wonderfully weird and it’s the perfect way to bring this incredible book to a close. Absolutely brilliant… Tim Mass Movement