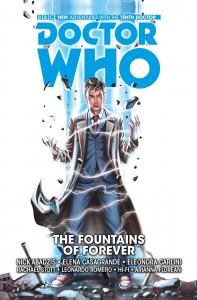 While I’m not unfamiliar with Doctor Who comics as a whole, this is the first time that I’ve stumbled across Titan’s take on the Tenth Doctor. And you know what? I like it. I like it a lot. Abadzis has captured the spirit of Tennant’s Doctor perfectly and has a feel for his dialogue and the way he reacts to the worlds around him; while Casangrande, Carlini, Romero and Stott must have burned his image directly onto their cerebellums. Not only are they incredibly talented artists whose work lifts this book into another dimension, but each and every panel that features the Doctor is imbued with the doppelganger effect, as every wayward hair, indentation, wrinkle and crease is perfectly replicated. I didn’t even mind having to play catch-up with his new companion, Gabby, who is every bit the equal of Donna, Rose or Martha with a whole heap of New York City attitude thrown in for good measure.

Then there’s the story. How could any long-time Whovian not like a plot featuring the return of the much missed Osirans, a multi-generational cult that worships them (the Osirans that is) as gods, the imminent destruction of all time and space and an aging actress who quest to delay death results in the creation of an alien human hybrid? What’s not to like, right? Especially when it’s carried off with the kind of confidence, energy and pace that Abadzis fills every page with in ‘The Fountains of Forever’.  Oh, and did I mention the philosophical aspects of the book? The ones in which the aforementioned author also questions the nature of deification, the rights of the individual versus the wellbeing of the whole and whether morality or the lack thereof is a product of nature or nurture. I didn’t? Well, I have now. It’s a Whovian delight… Tim Mass Movement