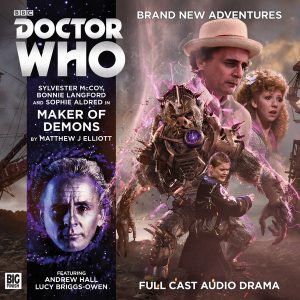 Now embarking on their third adventure together after their reunion in A Life of Crime, The Doctor, Mel and Ace arrive on the planet Prosper. It isn’t long though before Ace learns that The Doctor and Mel have already visited this world roughly one hundred years earlier, when the duo helped the human colonists and the gentle indigenous mole like creatures called the Mogera come together to live in peace and harmony. However, on their return visit all is not as they left it as the TARDIS crew find a world at war with the Mogera, now significantly evolved into fierce killing machines, and the humans are tearing each other apart and it is, of course, the Doctor who gets who gets the blame for this particularly nasty and vicious turn of events.

This is an edgy and dark story which splits the regulars up early, with Ace befriending a Mogera called Talpa while The Doctor and Mel throw in with the human colonists aboard the wreck of the spacecraft. It’s here on The Duke of Milan that they meet among others the colony’s leader; Minster of Fate Alonso and the scientist Juno. Once aboard the Duke of Milan The Doctor and Mel waste no time in getting to the bottom of what has happened during the last century.

Stories like this are always good fun. Adventures like The Ark, Timelash, The Face of Evil and The Long Game to name a few have share a similar at their core, in that the Doctor visits somewhere then leaves thinking he’s saved the day, only to return years later to find that things have all gone a bit awry. And this tale is no is up there with the best of them, boasting a truly mad, completely amoral villain who is willing to go to any lengths to accomplish his goals.

Sylvester McCoy, Bonnie Langford and Sophie Aldred are as brilliant as ever in the central roles and it is ever so refreshing to see, once again, that the Big Finish take on Mel is so much better than how she was realised on television. Bonnie Langford must be delighted with, and by, this. Gone is the annoying scream queen of the eighties and in her place is a strong, assertive, resourceful charismatic character. Andrew Hall and Rachel Atkins also give fantastic performances as Alonso and Juno respectively, who try to hold the struggling colony together. A belter of a story which’ll have you on the edge of your seat! Nath Rixon.