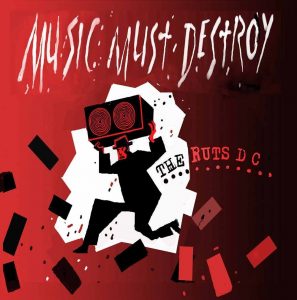 You know those bands that you always keep meaning to check out, but for one reason or another never really get round to doing so despite the fact that almost everyone you know keeps bubbling about how great they were and how their records changed their lives in all sorts of deep and meaningful ways? Yeah, well, that’s the story of me and The Ruts. Don’t get me wrong, I know , have sung along to on numerous occasions and love Babylon’s Burning just as much as the next middle-aged punk rocker, but that’s as far as it ever went with me. I always meant for our relationship to go further, but due to a multitude of factors and life’s little quirks, our time together never progressed beyond that song and now that I’m sitting here, feet frantically tapping away to, and playing air drums along with, Music Must Destroy I feel like repeatedly punching myself in the face for having letting all of the everyday piddly crap prevent me from having a life-long love affair with this band.

Dwelling in the middle of the musical ground inhabited by two of the greatest UK punk bands (yeah, yeah, blah, blah, yadda, yadda, get over it, it’s just my opinion and I’m sure you’ve got your own) to have emerged during the late seventies and early eighties, The Clash and Stiff Little Fingers, Music Must Destroy is an insanely catchy collection of energy filled anthems that are executed with precision and incredible attention to detail. No wonder Henry Rollins loves them so much. In fact, so great is his love for them that he filled in with them as their singer for a series of shows in the wake of former guitarist Paul Fox’s terminal cancer diagnosis and makes a guest appearance on this record.  And who am I, you or any of us to argue with Henry? If they’re good enough for Hank, they’re good enough for each and every one of us. Now if you’ll excuse me, me and The Ruts DC, we’ve got a lot of lost time to make up for, and Music Must Destroy, well, it’s the perfect way to begin to rectify past mistakes … Tim Cundle