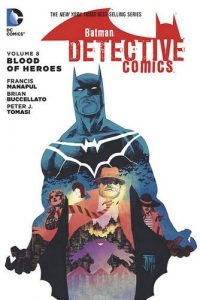 A world without Batman, in the DC Universe, is so inconceivable that even when Bruce Wayne died, plans were put in place to have his protégé don the cowl and assume his mantle. So when he’s waylaid during the course of duty and unable to continue in the role of the Dark Knight (it’s a long story, but one that’s well worth reading, so I suggest you do just that and invest some hard earned cash and spare time in catching up on what happened to the caped crusader),  Gotham is seen as ripe for the taking by the criminal fraternity; and with the help of more than a little private funding, a new technologically oriented Batman – with one of his predecessor’s oldest allies at the helm – steps into the breach. Having abandoned his role with Gotham Police Department, Jim Gordon is now Batman, albeit one that brings justice to the streets in an anthropomorphised tank; an exoskeletal suit of armour that transforms mortals into demi-gods. And Blood of Heroes is the story of how he learns to be the Batman, how his closest friend comes to trust him in the role and how Bruce’s old friends come to see James Gordon not only as Gotham’s guardian, but as one of their own.

As we’ve come to expect with Detective Comics and any Batman related title, the story telling throughout Blood of Heroes is densely layered and packed with intense characterisation and a myriad of subplots; takes within tales being the order of the day. From the nail biting, gritty noir of the opening arc that see’s Harvey Bullock and Renee Montoya teaming up with Jim to foil a conspiracy designed to bring their city to its knees, to the heart breaking and tear jerking story of how Jim learns to become “epic” in the company of the Justice League, through to the gripping instalment of the Robin War  in which he puts the pieces of the puzzle together with Dick Grayson before the true face of the enemy reveals itself, Blood of Heroes is everything you could ever want from Batman. Then there’s the fantastically detailed, gorgeous artwork (which I’ll bet you thought I’d forgotten about didn’t you?) that every page is dripping with and adorned in, which reflects the mood and tone of the tales being told perfectly while searing its way into your mind’s eye and leaving its mark on your imagination. It’s synchronicity of words and images in their purest, rawest and most undiluted form and every panel is a joy to read. He may not be everyone’s cup of tea, but I’m digging the hell out of this “new” Batman…  Tim Cundle