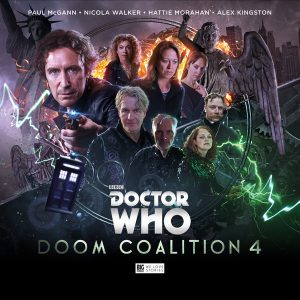 All good things must come to an end, but the culmination of one chapter in the Doctor’s life always heralds the beginning of another and such is the case with Doom Coalition 4. Following the spectacular cliff-haner ending of Doom Coalition 3, the Doctor and his companions, Liv Chenka (Nicola Walker) and Helen Sinclair (Hattie Morahan) find themselves cast adrift in a lifeboat / escape pod, hurtling through the time vortex toward the end of everything. Which can only mean one thing. That it’s time for the Doctor and his companions to pull their sleeves up and get back to doing what they do best: saving everyone from the Universe terminating machinations and schemes of Padrac and his cohorts in the Doom Coalition. A task that is, however, far easier said than done when your nemesis has locked you in an airtight box and sent you rocketing toward the final moments of creation. But this is the Doctor, and he and his allies, never give up, never give in and can usually be depended on to escape from nearly every impossible situation. Usually.

Opening with the taut, claustrophobic and Houdini flavoured Ship in a Bottle in which our imprisoned heroes realise that the only way out of this particularly nasty situation is a suicidal gambit which will probably result in all of their deaths, Doom Coalition 4 picks up where the prior instalment left off without missing a beat.  The Doctor and his stranded companions do have one ace up their sleeves that Padrac isn’t aware of (and of we’re being honest, neither is Number Eight. Not really) and that’s River Song, who in Songs of Love infiltrates the upper echelons of Gallifreyan society in order to learn all she can about the grand plans of Padrac and company, and if at all possible save her husband and his friends. With nearly all the cards laid on the table and the final hands being dealt, in The Side of the Angels, the Doctor, Liv and Helen arrive in nineteen seventies New York to team with an ally to help them fight against the destruction of all things, but are waylaid in their attempts to do so by both an old “acquaintance” and a foe who despite being in the Big Apple for half a century, remains ready to pounce in the “blink” of an eye.  And then it’s time to Stop the Clock, as the endgame begins when all of the players gather on Gallifrey and race to save the Universe (or depending on which side they’re on, end it) in a white knuckle, hold your breath adventure in which sacrifices are made, comrades fall, lives are lost and the Coalition of the willing, and admittedly slightly demented, are at long last, brought to boot.

It’s been an incredible ride, but thankfully Matt Fitton and John Dorney saved the best for last and Doom Coalition 4 ends like all great stories should. With a bang that shakes the very pillars of Heaven and a rather terrific segue which allows the Eighth Doctor’s escapades throughout time and space to continue with grand aplomb. Both Dorney and Fitton are on top of their game throughout, as the individual parts seamlessly flow into each to create a wonderful overall arc powered by intense, detailed characterisation and dialogue and energetic, exciting performances. And while the cast as a whole are superb, Rufus Hound’s acerbic and narcissistic turn as the completely amoral “villain” who throws a spanner in the works of the Doctor’s New York mission is especially delightful and I hope (fingers crossed, come on Gaia, you know you owe me one) that the Whoniverse hasn’t seen the last of him.  Fantastic… Tim Cundle