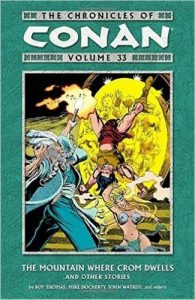 By Crom, I have not read Conan in an age! And in truth, have never read these strange, floppy tomes they call his Marvel Comics at all. I was – still am – a fan of the Savage Sword Of Conan magazine  – the stories and black and white artwork in the more adult-oriented, spin-off were sublime – but I never took, from the start, to its full-colour comic progenitor; it seemed, somehow, too comicky for Robert E. Howard’s brutal, sorcerous and occasionally blatantly misogynistic world. This despite the writing reins of both titles’ mainstay scribe, the mellifluous Roy Thomas, a man to whom I owe a personal debt of gratitude for helping me discover the exotic power of a well-crafted flow of words. Still, Conan The Barbarian had to be doing something right. It lasted for 275 issues and spawned Savage Sword… after all. So, did I miss something, back then in its two decade run between the 70s and 90s? To bring you this review, I slipped into my skimpy girly armour … cough, sorry, donned my manly furs … and the answer is, well, yes and no.

To be fair, by the time of the issues collected – 259 through 267 –  in this 33rdvolume of The Chronicles Of Conan – The Mountain Where Crom Dwells And Other Stories – the title was nearing the end of its life, and feeds quite hungrily on its own tail, referencing or reintroducing plots and characters in a way that makes it feel just slightly weary of itself. At one point, on the slopes of the title story, it’s like Piccadilly Circus, the number of old faces Conan meets; at another, later in the collection, our hero is so tired of hacking things to bits that all the poor bastard wants to do is get pissed. He can’t, of course, because there are the White Apes to deal with. These on top of Shuma-Gorath, the god-demon, Khalaari, the four-armed goddess of death, Hathor, the, urm, Panther god, and a bunch of nutters called The Masters Of The Half-Men, who worship – wouldn’t you fucking know it? – a  god shaped like a giant skull. Most of the tales are ‘freely adapted’ from the original Howard stories, though some make use of other writers’ work, which, while not inferior, is surely a sign that the well is running dry.

Jaded as all this sounds, there remains a lot of fun to be had here. If I have one criticism, it’s that the art of Mike Doherty, E.R. Cruz and John Watkiss can never, ever match the haunting magazine work of John Buscema, Alfredo Alcala, Barry Windsor-Smith and the like, but then that’s grown-up stuff, and this was never meant to be. Horses, as they say, for courses. At the end of the day, this is still leagues ahead of most of today’s titles in terms of the riches crommed in there (sorry), and much magic and mayhem awaits. My recommendation? Wait for it. Buy Crom! Mike Wild