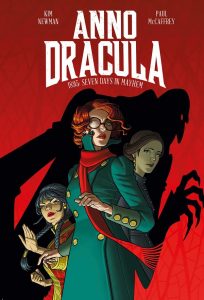 In 1992 author Kim Newman released a book that took both historical and fictional figures and created a world in which Vlad Dracula wasn’t killed by Van Helsing but instead was able to marry Queen Victoria and effectively take over the British Empire and spread vampirism throughout the world. Yet, even in this alternate reality, there are those who would stand against Dracula’s new order in an effort to finally erase the vampire.

Anno Dracula 1895: Seven Days in Mayhem starts in the tenth year of Dracula’s reign with a massive victory over several nations that had joined forces to battle him. Katharine ( Kate) Reed one of the newer vampires and also a journalist, writes about the injustices of how England is run and is a member of Council of Seven Days, an organization that is trying to destabilize the rule of Vlad’s regime. Kate has also found out that there is a traitor on the Council, a fact that comes down hard on them when their latest meeting is raided by The Grey Men. Penelope Churchward, a friend of Kate, has taken a different direction and has used her upbringing to gain entrance into the upper echelons of the Dracula’s court. She is called upon to help organize a Tin Jubilee for Dracula, to celebrate being in power for ten years as well as the crushing defeat of the allied forces at sea, although her motives for doing so remain, for the time being, shrouded in mystery.

While I haven’t actually read any of Kim Newman’s previous novels, it was a pleasure to see that he remains in full control of the world he created in prose form which has now been transplanted into the four colour universe, while artist Paul McCaffrey helps to translate this world into picture form, filling out and breathing additional life into Newman’s creation. And McCaffrey immediately captures his audience’s attention with his glorious opening pages in which the forces of the coalition who would see Britain fall are decimated in glorious detail by monsters defending the realm. This first issue is a great start way to begin the expansion of Anno Dracula story with fitting artwork and a plot that draws the reader in even if they are completely unfamiliar with Newman and the world of Anno Dracula Jason Bonton