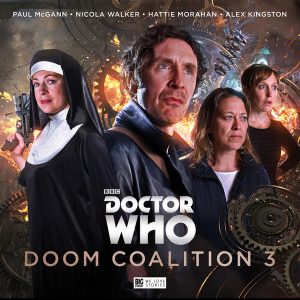 Well, where shall I start with the latest chapter of the Doom Coalition saga? Let’s dive straight in and talk about River! She’s back! And here she plays a much bigger part than she did in her appearance toward the end of Doom Coalition 2. Alex Kingston has settled into the world of Big Finish fantastically and is just as good on audio as she is on television. River works very well alongside The Doctor, Liv and Helen and creates an incredible sense of fun as she finds interesting ways to hide her true identity from her future husband and then there’s the nun with a big gun thing which…Wait, I’ve said too much. Forget the last bit, it’s time to move on to the story…

Split into four parts Doom Coalition 3 is a wild ride that takes its audience through the fifteenth, twentieth and twenty first centuries by way of a Time Lord super weapon. The first part Absent Friends is a haunting story centred around a barrage of mysterious phone calls and Helen’s experiences, in particular, during this story are deeply moving. The Eighth Piece splits up the TARDIS team and it’s in this part of the adventure that the Doctor comes face to face with one of the most fanatical extremist’s in British History; Thomas Cromwell. Liv meanwhile investigates the strange Clockmaker in fifteenth century Prague and Helen seeks the Eighth Piece in present day Rome. The Doomsday Chronometer follows seamlessly, as each member of the crew discover more about who, and what, is behind the events taking place when the enigmatic Clocksmith shows his hand. Finally in The Crucible of Souls the Doctor and River set out to save the universe while Liv and Helen are left to deal with an imposter.  All the players are eventually reunited aboard the aforementioned Time Lord super weapon as the Eleven once again rears his noisy, over crowded head. Can The Doctor and company save the universe, and the future, before it’s too late?

Doom Coalition 3 is a more than worthy entry in this ongoing series. It starts off well with the atmospheric and emotional Absent Friends, but lags slightly in the middle before picking up again in The Crucible of Souls.  As always the main cast are superb, with Paul McGann leading the way effortlessly, and both the Clocksmith and the Eleven, the villains of the piece, are suitably manic and bonkers. It’s a dark, tense, set of adventures with one hell of a cliff-hanger that’ll leave you screaming at your PC / Stereo / Ipad etc. for Doom Coalition 4 to hurry up and arrive!  Nath Rixon