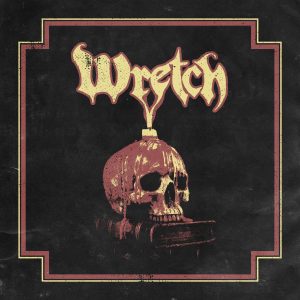 Of all the metal sub-genres, doom metal is one that rarely disappoints. You could say that it is down to the relatively straightforward formula of taking those classic Sabbath ingredients and shaking them about a bit, but just as an artist who has all the colours of the rainbow available but chooses simply to paint in black and grey, the skill is to create your own magic using a limited palette. Wretch certainly operate within the darker colours of the spectrum. This is doom of the plodding, mournful variety as opposed to the blazing multi-coloured psychedelia that it can sometimes be. Think Sabbath, St Vitus and The Obssessed and there you have the building blocks upon which Wretch have built their sound. I’m reminded of St Vitus in particular, with the vocals often following the melody of the guitar lines. You can tell that the band is a power-trio, as they allow space for each instrument to explore the songs without overly rushing things. This is most evident on the power-jamming instrumental Bloodfinger where guitar, bass and drums all explore their own worlds yet work together seamlessly. Surprisingly the songs aren’t overly long, with the exception of Icebound which builds up the atmosphere around a central musical theme, taking you into outer space with a tempo change in the middle before bringing you back down to the slow drawl. Wretch haven’t rewritten the rulebook here but they have taken some trad elements of the doom genre and cooked up their own devil’s brew. Tom Chapman