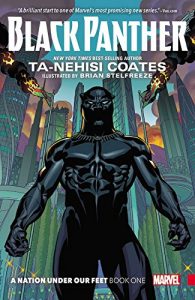 You know those characters who you’ve always meant to invest some time in, but for one reason or another (usually life stuff and abysmal finances) you never actually getting around to doing what you’ve promised yourself, and them, that you will? Well, Black Panther falls into that category for me. I mean, he’s always been on my radar through his involvement in the Avengers and later the Illuminati, and I’m more than aware of his incredible back story and rich history; and while I’ve always meant to add the ever expanding and impressive list of trade paperbacks and graphic novels that he’s the numero uno attraction in to my pull list, it never seems to happen. That however, is all going to change, and I’ve already pushed a few books up to the top of my chart and invested some shekels in an attempt to discover more about the life and times of T’Challa, the King of Wakanda. Why the sudden change of heart and sense of urgency?  Because I spent an hour or two in his company with the opening volume of Ta-Nehisi Coates’ A Nation Under Our Feet and as soon as I managed to pick my jaw up the floor, where it had come to rest thanks to the combination of amazement, surprise and unadulterated pleasure that flowed through me while I digested page after sumptuous, plot filled page, I immediately began to rectify my grievous error of judgement.   It would seem that I’ve been missing out on following one of the most complicated, conflicted and interesting characters in the Marvel Universe and the only thing to blame for my negligence is my own damnable laziness and laconic, and somewhat idiotic, belief that I’d eventually get around to it.

Okay, so in all probability, the reason that A Nation Under Our Feet is as thoroughly enjoyable as it is, is almost certainly due to a combination of Coates’ writing, character development and plotting and Stelfreeze’s dazzling and delightful artwork. It’s the story of a man trying to find his place in the world, a King trying to finally understand his Kingdom, one that’s been ravaged by all sorts of disasters, but yet, on some fundamental level still holds out hope for, and has faith in, its monarch. Beset by personal tragedy, T’Challa attempts to once again find his place in Wakanda, while outside and internal forces weave their influence throughout the populace in an attempt to wrestle power from him and change the face of his country forever. A Nation Under Our Feet   is a powerful cocktail of the political and personal that thrives thanks to its cast of vivid, fully rounded, detailed players and the myriad of sub-plots that each of their tales adds to the overall story.  Coates storytelling veers between the robust and delicate, yet never feels forced as he deftly explores and incorporates the magnificent history of Wakanda (some of which I know thanks to being an Avengers fanboy and geeking out over the Illuminati) into both the saga he’s telling and the lives of those who have been chosen to take part in it. Oh, and as a little extra, the comic book version of the DVD bonus features that we’ve all come to know and enjoy (despite not wanting to admit that we do), Marvel and Panini reached back unto the Kirby and Lee vaults, dug out the very first appearance of the Black Panther and included it to satiate the appetite of an audience determined to know all there is to know about T’Challa. But you know what? Want me to tell you a secret? I’ve got a sneaking suspicion that as good as this book is (and it is very good), the best is yet to come… Tim Cundle