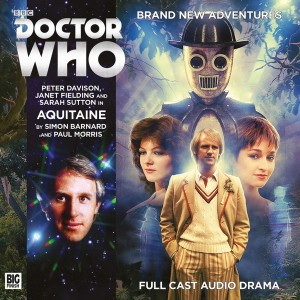 Time is everything. All of the important things, big and small, they’re all constrained, restrained, revolve around, and even exist, because of time. Without it, there would be nothing. No you, no me, no Earth, no solar system, no galaxy, no universe, nothing. Modern physics postulates that time and space are inextricably linked, the Euclidean model of the latter stating that while it forms the substance of three dimensional reality, our understanding of the Universe and the laws that govern it, is hugely dependent on the fourth dimension and it’s interaction with the aforementioned three dimensional model. That fourth dimension, is of course, time. Together, they become space-time, the domain through which the Doctor and his companions wander;  a vortex of endless possibility that offers no end of enigmas and conundrums about which The Doctor thinks he at least has some sort  of grip on and understanding . Until that is, he answers a distress signal from the Aquitaine, an apparently deserted ship orbiting high above, and studying a black hole.  For when he responds to that call, not only does he learn that he doesn’t know as much as he thought he did, but he also plunges himself and his companions into an adventure that takes them to the very edge of a raging, chronologically fractured, cosmic hell.

Manned by an on-board AI, Hargreaves, who assumes all of the robotic duties, the Aquitaine, appears to The Doctor, Tegan and Nyssa, to be a lifeless hulk, in which the botanical samples collected for study, have swarmed almost out of control and where time has started breaking down. After all, according to Hargreaves, the crew disappeared, one by one, just seven days ago, but the ship tells a different story. Then there’s the screaming, the awful disembodied screaming that seems to haunt the corridors which, when Nyssa finds herself in need of medical care following a rather vicious brush with some of the plant life, the Doctor and Tegan decide to investigate. And that’s when everything slowly begins to take a turn for the worse. Separated by events and the terrible circumstances that have led to the Aquitaine’s present fate, the horrible truth about what really happened to the crew is finally revealed, and as it slips toward destruction, the Doctor and his friends race against time to try and save both the ship and her doomed crew.

Paying homage to the aging classics, and more gory moments, of Science Fiction (namely The Black Hole, Silent Running and Event Horizon), the undisputed heavyweight of cinematic and literary horror (Frankenstein), murder mystery titans like Agatha Christie and that most English of authors, P.G. Wodehouse, Aquitaine is a rousing drama that’ll make you tremble with both excitement and fear. Infested with a stygian humour from start to finish, it’s an energetic romp in which monstrous vegetation, mutants and the most destructive force known to science combine to create a tale that’ll live in your memory long after it’s finished. Matthew Cottle’s C-3PO possessed by Jeeves turn as Hargreaves and Harry Myers as the deranged Akunin head a supporting cast who, alongside the always excellent Peter Davison, Sarah Sutton and Janet Fielding, bring to life the incredible, tension riddled story by Simon Barnard and Paul Morris.  Fantastic stuff… Tim Mass Movement