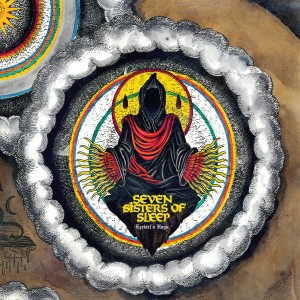 Grinding out of the Gates of Hades in whirlwind of devastation and musical blunt force trauma, Seven Sisters of Sleep’s latest offering, ‘Ezekiel’s Hags’ explodes in a maelstrom of furious blast beats, heavy as hell sludge driven metal missions and raw, focussed aggression. Soaked in venom and vitriol, their bellicose riffs fuse with the primal, driving rhythms and growled, howling vocals to create a vicious amalgamation of “Drop Out” era 16, Extreme Noise Terror, buzzov-en and Neurosis, whose monstrous power is underpinned by a haunting, almost subliminal, melody. This is the soundtrack to the end of the world, so grab yourself a front row seat, relax and let yourself by subsumed in ‘Ezekiel’s Hags’ destructive embrace. Welcome to Armageddon… Tim Mass Movement