Warning: preg_match() expects parameter 2 to be string, object given in /var/www/vip4/sites/vip6102689/httpd/htdocs/wp-includes/formatting.php on line 4866
 Doctor Who: The Labyrinth of Buda Castle - Mass Movement
x
Spread the love 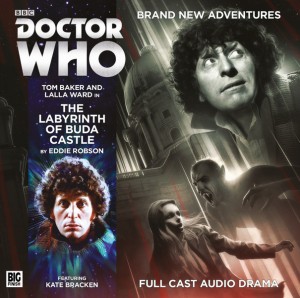 Do you miss the halcyon days of having to hide behind the sofa and burying your face in a cushion because watching Doctor Who was frightening? Because you were terrified that something terrible might happen to the Doctor and because the monstrous villain he was battling that week was not only petrifying, but would also scar your psyche forever more? I do, or at least, I did until The Labyrinth of Buda Castle, Eddie Robson’s ode to the Hammer inspired era of Who typified by the Robert Holmes stories The Talons of Weng-Chiang and The Brain of Morbius, caught me in its chilling embrace.

Having arrived in Budapest and intent on finding a good restaurant, the Doctor and Romana are compelled to put their dining plans on hold when they stumble across the “corpse” of the latest victim in a series of grizzly, and apparently random, murders. But as they’ve learned on their travels together, there’s no such thing as coincidence.  They’re soon embroiled in a hunt for a seemingly immortal creature of myth and legend, one who has risen from The Labyrinth of Buda Castle to enact, and fulfil, his dreadful plans for humanity. Entering the ancient catacombs in pursuit of the quarry, the hunters soon become the hunted, as the Doctor slowly becomes aware that by becoming involved, they may well have doomed the entire Universe to the same appalling fate that awaits mankind.  As Budapest begins drowning in a plague of violence, it’s left to the Doctor and Romana to finally lay to rest the evil that lurks in The Labyrinth of Buda Castle.

Eddie Robson’s story updates traditional vampire lore and gives it a thoroughly modern twist, incorporating the idea that knowledge, or rather the power and leverage that it gives an individual, has become the irrefutable commodity of choice in the twenty first century. And this thirst for infomation fuels Mark Bonnar ‘s spine-tingling, eerie turn as the Doctor’s latest nemesis, which pulls the rug from under the rest of the cast, steals the show and definitively illustrates why, despite ourselves, we always secretly root for the bad guy. When they’re this good, how could you not? However, that doesn’t mean that the other players just dial it in, they don’t. Each character is fully realised and incredibly well performed and Tom Baker and Lalla Ward, as The Doctor and Romana give, as they always do, one hundred and ten percent. It’s just that Mark Bonnar is so good in this suspense laden tale of dark, devious shivers and thrills that it’s nigh on impossible for anyone to emerge from his shadow. Horribly good… Tim Mass Movement