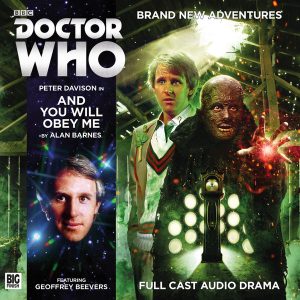 In his long and illustrious life as a wanderer, The Doctor has rarely had to face danger by himself.  He’s almost always had the luxury of having someone, a companion, sometimes two or even three, to stand by his side as the faces the maelstrom of chaos and uncertainty that the Universe places in his path. He has, however, faced the unknown on his own. It has happened before and it will almost certainly happen again. Most notably, in The Deadly Assassin, when he was forced to confront and defeat the Master on Gallifrey and by doing so, saved his home from his oldest friend and most deadly enemy. And in And You Will Obey Me, he finds himself in a similar predicament after answering a distress call from the Master’s Tardis. Believing that he won’t be long, that it’ll just be a matter of securing the vessel, and being beset by the endless doubt and conflicting emotion that always plague him in any predicament involving his fellow Timelord, he leaves his friends behind and flies off into the future to find out what has happened. It isn’t the first time that he’s allowed his feelings to cloud his judgement but it just might be the last, as once again, he underestimates the sheer evil of his adversary and wanders into another of the Masters finely tuned traps.

After bidding for, and failing to win, the Master’s Tardis in a rural auction, the Doctor soon discovers that his nemesis is “dead”.  As it soon becomes apparent that news of his old “friend’s” demise was grossly over exaggerated, the Doctor attempts to reclaim his Tardis from the successful bidder. It’s task that’s easier said than done, and before he knows what’s happening he’s immersed in a seething cauldron of decades old mind control, planned body swaps, murder and theft; all of which he must negotiate while attempting to avoid being executed by the various alien bounty hunters seeking the elusive Master. Carefully and cleverly plotted, And You Will Obey Me is a twisting, turning, emotive and heart wrenching drama that accentuates the evil of the Master by focusing on his willingness, which includes manipulating, using and then casting aside the young, to do anything to survive.  The ruthlessness that lies at the stories core is further exemplified by those who come looking for him, which in turn serves to alienate the Doctor even further as he becomes the sole voice of reason in a multi-layered tale of deception, desire and vengeance.  Fantastically well written and performed, And You Will Obey Me, effortlessly blends mystery, science fiction and a sliver of Hamlyn styled darkness in a story of good versus evil and the formers refusal to give in to, accept or allow the latter to flourish. Sometimes the Doctor just needs to be alone… Tim Cundle