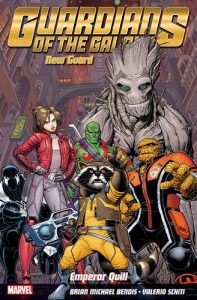 Life moves pretty fast in the Marvel Universe and if you don’t stop and look around once in a while, you could miss it. Okay, so yeah, I “borrowed” that line from Ferris Bueller, but as Peter Quill embodies the same anarchic charm and self-assured arrogance as John Hughes’ most famous creation I thought it was not only apt, but also strangely relevant given how rapidly things are evolving and changing in the Marvelverse.  Come to think of it, Guardians of the Galaxy are like the Marvel U’s version of a continually developing John Hughes film. The team is made up of a bunch of oddballs who in the normal course of events would never dream of spending anytime together but develop an inseparable bond after fate sees fit to inseparably link their fortunes. Then there’s quirky, direct and humorous dialogue and the endearingly off kilter characters misunderstood by everyone in the Universe outside their group who  find themselves caught up in no end of wondrously bizarre situations and always end up saving the day in all manner of spectacular ways. Oh, and the, arguably, two lead players are, of course, dating.  The Guardians of the Galaxy are the interstellar version of the coolest kids in Shermer, Illinois and we’ve all (you, me, everybody) fallen under their spell. Not bad for a bunch of B-listers who a decade ago were only recognised and known by the most dedicated elements of fandom. It’s the age old underdog and perpetual outsider eventually turning the tables and making good story. Incidentally, that plot device was also one of the most used, and recurring, themes in John Hughes’ films.  Anyway, that’s enough of my whacky theories, let’s move on.

Emperor Quill finds an almost all new team flying the Guardians flag while Peter is off ruling Spartax and Gamorra is off being, well, Gamora. Kitty Pryde has become Starlord, Ben Grimm has joined the team and Rocket has become their self-appointed leader. However when they “liberate” a “cosmic artefact of immeasurable cosmic import” from the Chitauri, scared of what it might contain, they take it to the only person they know who has the facilities to safely deal with it. That person being Peter Quill, who, being the emperor of an entire world has everything necessary to stop the Universe possibly ending when the artefact is opened.  Before they can even begin theorising about their acquisition’s contents, the surprise arrival of an old friend plunges them into a whirlwind of near planet ending violence and action, as the last of the Kree Accusers comes to Spartax seeking vengeance on those she blames for the destruction of her home.  Speaking of vengeance, the New Guard even though they haven’t been together all that long, have already put a nose or two out of joint; and one of the bigger, badder nasties that they crossed paths with also turns up looking for a modicum of revenge. In the aftermath of the bedlam, disorder and chaos that lays waste to Quill’s new kingdom, everything is reset and Peter and his team mates are once again reunited. It’s a feverish, insanely enjoyable story that looks incredible and roars along at a frenetic and hectic pace, in which the characterisation, interaction and dialogue take centre stage in a gloriously detailed and beautifully illustrated galactic back drop.  There’s a reason that Guardians of the Galaxy is one of the most engaging and consistent books that Marvel are currently publishing and Emperor Quill is that reason. It’s better than the best John Hughes epic that he never made and you’ve never seen. That’s set in space.  Yeah, it really is that good… Tim Cundle