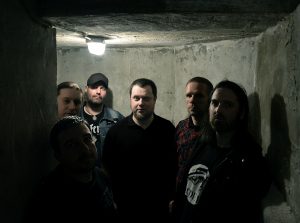 I was born in Plettenberg, Germany in the late ’70s. Plettenberg is a typical small town pressed into four of the countless clammy valleys of the Western Sauerland. Like in most towns at that time and in that area Plettenberg’s core industry was metalworking, processing iron and steel from the Ruhrgebiet. When I was a small child my family lived in a house right next to one of the many drop forge plants. A few years ago I’ve talked with my parents about that time. While hearing their stories about our time in Zeppelin Street a rhythm bubbled up from the depths of my memories. The rhythm of the massive forge hammers of the “Otto Berns” drop forge plant. Slow-paced and super-heavy strikes coming from the ground continuously. The strikes had enough energy to rattle the glasses in the cabinets. It was very physical. You could even hear the strikes kilometres away as the valleys worked like a funnel amplifying the hammers. We lived with that rhythm for many, many years. When we moved a few streets away from the plant the direct rhythm stopped. To be exact the rhythm didn’t stopped. It just got buried. Today I know that my musical socialisation is a result of this formative long-term impression. I started to get hold of that beat again. My first approach in young years was Gabber. That phase lasted for half a year. Too fast. Too stupid. I kept on searching and a long-year East Coast Hip-Hop phase followed. But still I missed the mercilessness and darkness of THE beat in conjunction with the rainy and cold climate of my home town. My main journey found its end at a night during the glorious Stonerrock.com / K666 radio times when I heard 5ive’s “The Baron” for the first time. Since that night I am addicted to pounding drums and super low end strings. I am 37 now. I am singing and creating noise in a doom band for nearly 10 years now. Today I am learning bass, as I need to find my own tone. THAT tone and THAT beat. After some experimenting I do now have my dream setup consisting of a Peavey T-40 bass with a Bisonic PU, a Fender Bassman 300 Pro head and a barefaced Eight 10 cab. The “Otto Berns” drop forge plant got demolished in 1995 but over 20 years later I am ready to build my own tonal drop forge plant.