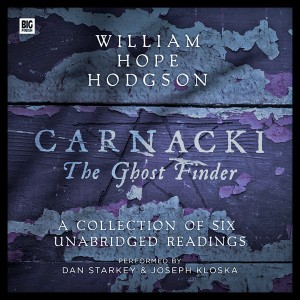 While I consider myself to be fan of horror fiction, I have to admit, with a slight sense of shame, that before listening to Carnacki I was completely unaware of William Hope Hodgson. I knew nothing about his books and even less about the man himself, but having spent a delightful, if somewhat unsettling day, in the company of Thomas Carnacki, I have since rectified both mistakes and in doing so, stumbled across a fascinating body of work and  it’s even more intriguing creator.  Hodgson though isn’t the focus here, that honour belongs to his most well-known and established character, the ‘Ghost Finder’, Carnacki.

Told in their unabridged form, and in keeping with the tales, Carnacki The Ghost Finder includes the original six stories featuring the occult detective that were published before Hodgson’s death in 1918. Following a welcome, if slightly rigid formula, each chapter begins with the hero’s friends gathering at his home so that he might relate the specifics of his latest adventure to them over drinks and while smoking his ever present pipe. Whether debunking the hysteria of a haunted house, battling cursed artefacts or fighting the forces of the supernatural, each of the stories is fascinating, due in no small part to Dan Starkey’s remarkable reading in which he, in your mind’s eye, morphs into, and becomes Carnacki. Feeling almost like a theatrical production, one in which the audience is captivated and entranced by Starkey’s performance which make you feel like you’re one of Carnacki’s guests,  The Ghost Finder, and the tales of which it is comprised have a haunting quality and linger in your imagination long after they’ve finished. While the prose and language are of their time, the fiction and the gothic tradition that it encompasses and from which it was originally born, should find favour with fans of Poe, Lovecraft, Wheatley and Ashton Smith, all of whom were influences upon, or influenced by Hodgson.  Pull up a chair, the fire is lit and Carnacki has a tale to tell… Tim Mass Movement