Warning: preg_match() expects parameter 2 to be string, object given in /var/www/vip4/sites/vip6102689/httpd/htdocs/wp-includes/formatting.php on line 4866
 Hellboy And The B.P.R.D.: 1953 – Beyond The Fences #1 – Mike Mignola, Chris Roberson, and Paolo Rivera (Dark Horse Books) - Mass Movement
x
Spread the love 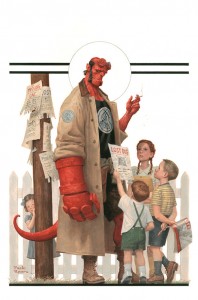 The Hellboy universe has a vast reach, from pre-World War One to the present. Thanks to its fluid approach to period, a plethora of stories can be told including characters that are already established, new or have just been mentioned in previous stories. In the first issue of Beyond The Fences, the B.P.R.D. is sent to investigate reports of six missing children and one adult. When the team reaches Rosemead, California they find a seemingly normal enough, on the surface anyway, town, but one with a fear of darkness, for when night comes it isn’t only family pets that go missing. Their first break comes when a doctor is caught with Enkeladite, a material that refreshes bad memories for the team and that lets them know that things in Rosemead are for from well.

Writers Mignola and Roberson start off the first issue of this new storyline in rapid fashion, dragging the reader along and barely allowing them time to pause for breath. Which, believe me, in comic book terms, is a good thing. A very good thing. . The dialogue for each character tells the reader all they need to know about them, and still leaving plenty of room for their individual development in the coming issues. Rivera’s art is a nice change from the usual Hellboy style, as it’s more based on what is seen than what is not, and the shadows that seemed like a Hellboy staple have been replaced with far more detail.

Beyond The Fences #1 is a great change in both the look and storytelling style of this long established book, one that pulls the reader in from the start and never lets go. It’s been a while since I was excited about a new Hellboy book, but with the addition of Roberson and Rivera the magic that seemed to have vanished is back, and there’s something to look forward to in the Hellboy universe again. Jason Bonton